EXAMPLE: The unused rooftops of Melbourne’s buildings are a massively underutilised resource that has the potential to create new green space in the central city that is bigger than Royal Park. 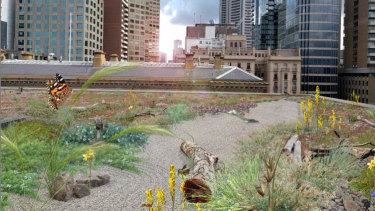 Artist's impression of the green roof at 1 Treasury Place

Melbourne has made a good start in greening our skyline, but we are a long way behind the sorts of  cities we like to compare ourselves to.

There are currently about 40 green roofs covering five hectares in the City of Melbourne area. This compares to Toronto which has about 500 green roofs and Munich which has 300 hectares of green roofs.

In 2009, Toronto was the first city in North America to adopt a bylaw to require and govern the construction of green roofs. Munich has had laws that mandate green roofs since the 1990s.

With almost 1 million people in the city on a busy working day, there has never been a greater need for Melbourne to consider what more we can do to create new green space.

Green infrastructure can help with building heating and cooling costs, increase biodiversity, reduce the urban heat-island effect and incidents of flash flooding as plants absorb rain that would otherwise go into storm water.

For the humans of Melbourne, green spaces can play an important role in their wellbeing, through recreation, solitude and opportunities to appreciate nature.

That is why the City of Melbourne has planted more than 18,000 trees since 2012, and delivered almost of six hectares of new green open space.

But more action is needed, especially in the private realm. Currently rooftops across the municipality make up 880 hectares of space.

Our mapping shows that 328 hectares (37 per cent) of rooftops have low, or no constraints for a retrofit with green roofs. These roofs could create a new Royal Park in the sky.

The City’s current approach is more “carrot than stick” with a range of innovative programs to encourage the private sector to increase its uptake of green roofs and green infrastructure.

The Urban Forest Fund provides financial incentives to support those wanting to green their properties, including green roofs. Of particular interest are projects that are outside business as usual, and can be accessed and enjoyed freely by the public.

A great example of this in action is the new Melbourne Skyfarm. The fund has provided $300,000 to help transform the rooftop of a huge concrete carpark tower overlooking the Yarra into an urban farm.

Another example is the recently launched green roof being built on the top of 1 Treasury Place with the joint support of the City, Victorian government and the University of Melbourne.

This project will deliver a green roof that will be a test bed to research different soil conditions and various species of shrubs, wildflowers and grasses. This will be used to develop guidelines for planting, maintenance and irrigation options for green roofs in different settings across the city.

One of the barriers to uptake of green roofs in Melbourne, and Australia in general, is the limited evidence of best design, plants and conditions for this important infrastructure to thrive in our city’s unique weather conditions.

We also recognise that another barrier is our current planning framework. It must be improved to require better greening outcomes for residents, workers and biodiversity in our city.

Cities like Toronto and Munich as well as Berlin, Chicago, London, Seattle, Tokyo, San Francisco and most recently New York have all created a greener city by introducing planning requirements that effectively mandate green roofs and green space in new developments.

The cities are now using the “regulatory stick” to encourage more green space in private developments. Research across all international cities confirms that the increased number of green roofs would simply not have occurred without these regulatory changes.