Nature has a Solution

Biophilic design (design features that reconnect people with nature) help reduce stress in the workplace & home. In an ideal world every interior & flat rooftop will have either a green wall or green roof to compensate for the lack of contact with nature that is a reality for many urban dwellers in 2020.

Such amenities are in line with scientific and psychological theories about humans’ intrinsic need for exposure to natural environments — a disposition known as biophilia. 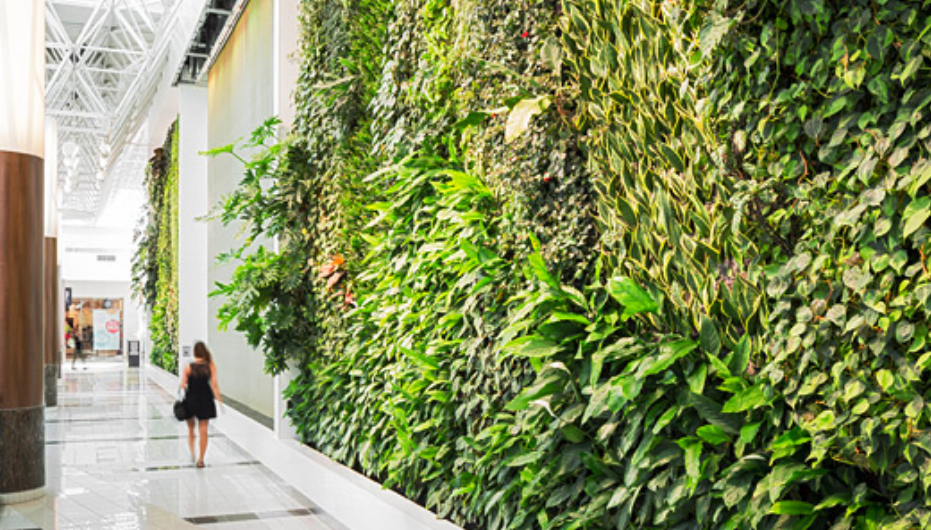 “Yes, LEED has caused attention to some of the increased awareness of daylighting and views, operable windows, but I think there’s a whole lot more that we could be doing to work with decreasing stress,” professor Ann Callaghan told attendees at the Canada Green Building Council’s annual national conference in Toronto earlier this month. Interior design is rightly focused on natural dayliht factors; air flow / natural ventilation; smart tech to regulate and control work & home environments, which is commendable, however, there is a lack of action to incorporating plants throughout urban spaces, both interior & exterior.

Joint research from Carleton and Western Universities revealed that 57 per cent of 25,000 surveyed full-time employees reported high levels of stress. “Stress levels have gone up and life satisfaction has gone down,’’ co-researcher Linda Duxbury said in a statement to Carleton when the study was released. “Email use has gone up, as have work demands. There are more employees balancing work, elder care and childcare. But despite the talk, many companies have not made progress in the area of work-life balance and employee well-being.”

With respect to COVID-19 and demands for isolation there is a resultant tremour of fear & stress, worldwide.

Now is the time to connect with nature.
Multiple studies have reached the same conclusion. For instance, a 2007 study published in the Scandinavian Journal of Forest Research found that workers with views to trees generally reported less career-oriented stress and higher job satisfaction than those without views, regardless of age, gender or position in the company.

Similarly, a study published in the Landscape and Urban Planning journal found adults who lived in neighbourhoods with large areas of green space harboured lower levels of the stress hormone cortisol.

Not every office can be situated beside a forest and have access to breathtaking views, but there are certainly other ways to incorporate biophilic design.

Natural materials offer another way to incorporate nature into the office. For example, consider trading plastic or laminate desks for ones made of wood. A University of British Columbia and FPInnovations joint study discovered a link between wood and human health, and concluded that the presence of wood surfaces in a room decreased sympathetic nervous system (SNS) activation, which is responsible for activating the body’s fight-or-flight response.

If there isn't the budget to install a massive green wall then ... consider ... potted plants for a similar positive effect. Researchers at the Norwegian University of Life Sciences and Uppsala University found the mere presence of plants reduced stress and even assisted in health issues such as dry throats, headaches and dry skin.

Similar studies have been conducted in North America. Researchers at Washington State University concluded potted plants are particularly helpful for workers who do not have access to windows.

The study found that employees who completed a computer task in a room with plants were, on average, 12 per cent more productive compared to their counterparts in a plant-free room. Additionally, blood pressure rose by four points for participants without plants and only two points for those completing the task with them.

If you can't get a plant then look at plant images and add natural designs to your environment ..... this research data has been available for many years ... perhaps now is the time to take note.