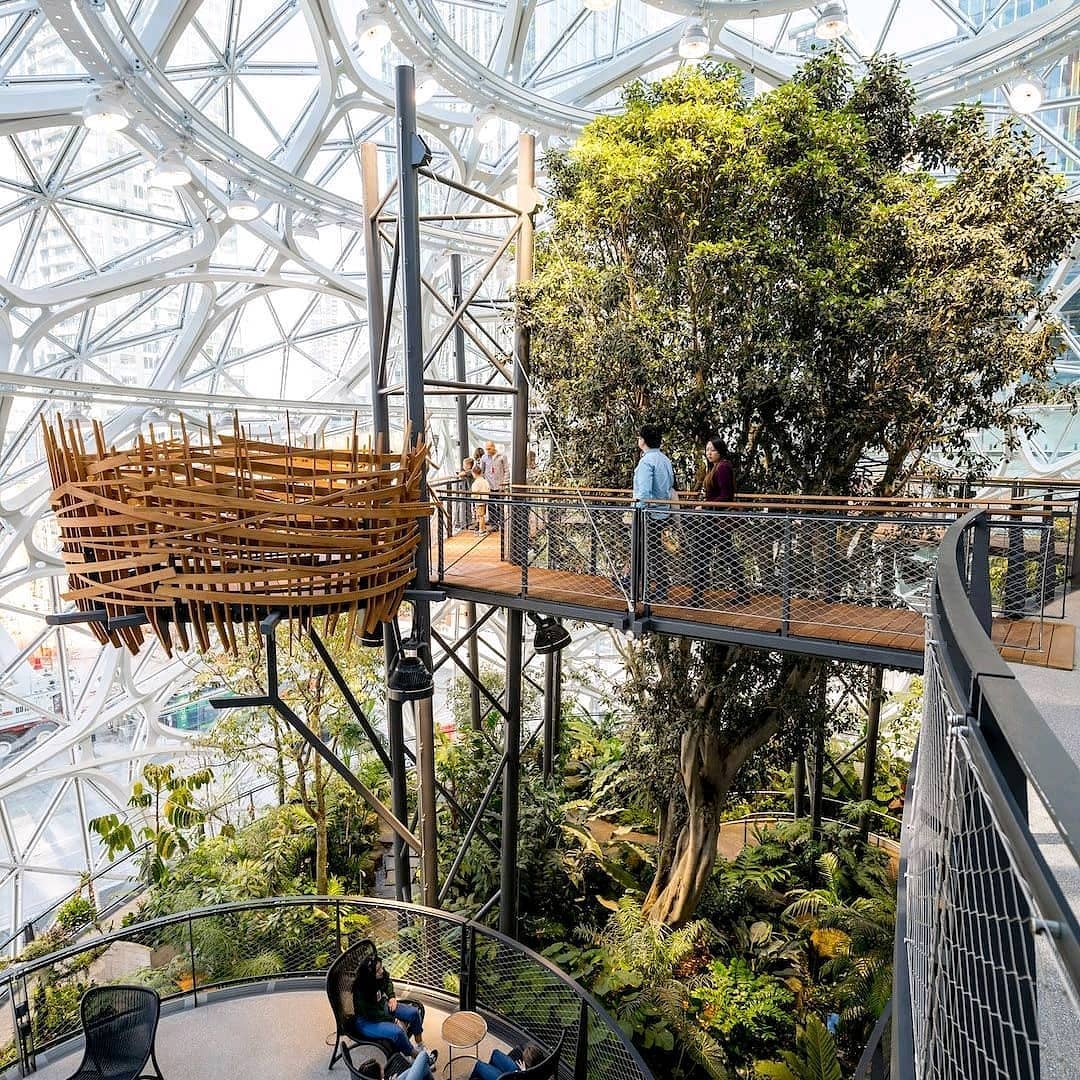 A desk, a computer and four grey walls. For some employees, this is pretty much all they have to look at from nine to five, five days a week. In soul-crushing environments like these, it should come as no surprise that a trip to the kitchen can serve as a daily highlight, particularly if it provides some natural light and a fleeting glimpse of the outside world.

Work doesn’t have to be like this, however, and for some employees, it isn’t. Increasingly, workplaces are incorporating green spaces and organic materials into their office designs. This new approach to the workplace doesn’t only have aesthetic benefits, however. Biophilic offices can boost productivity, increase staff creativity and improve workers’ mental health.

It’s not easy being green
According to the 2018 Work and the Outdoors Survey conducted by clothing retailer L L Bean, 87 percent of indoor workers consider themselves to be someone that enjoys the outdoors, but 75 percent rarely or never take the time to work outside. Often there simply isn’t time; on other occasions, it just isn’t practical.

For decades, psychologists and social theorists have explored mankind’s innate desire to connect with the natural world. This relationship has been termed ‘biophilia’ and has been hypothesised as being the result of millions of years of biological evolution. Recently, however, the rapid urbanisation that has gripped the world has made it more difficult for humans to connect with nature as frequently as they would like.

To fill this gap, employers are using biophilic office design to bring the outside world into the workplace. Chris Alldred, a design director at K2 Space, a London-based office design company, told European CEO that a number of different approaches are being explored in order to bring the working and natural worlds closer together.

“A common misconception is that biophilic design translates to adding lots of plant life and shrubbery; it is far more complex than that,” Alldred noted. “There is a multitude of possibilities including maximising natural light, using colour and incorporating a mix of natural materials such as wood, metal and stone within the workplace and, of course, introducing plants and features like green or living walls.”

The trend for embracing biophilic design has captured the imagination – and budget – of some of the world’s largest companies. At the start of 2018, Amazon’s Seattle HQ formally opened the Spheres, three huge glass domes that contain 4,000sq ft of space and more than 40,000 plants. The biodomes feature a diverse range of flora from more than 30 countries.

In total, Amazon’s urban campus, where the Spheres are located, cost $4bn (€3.5bn) to build, but the e-commerce giant is not the only business investing heavily in biophilic design. Telecoms firm Moneypenny recently spent £15m (€17m) overhauling its offices in Wrexham, North Wales, incorporating a huge number of plants, natural ventilation, a duck pond and an orchard.

Last year, Microsoft built three tree house workspaces in the 500 acres of woodland that surround the company’s Redmond HQ. Unsurprisingly, they still boast all the mod cons expected of a 21st-century technology firm.

Not just a pretty space
Whether companies are spending millions on their biophilic designs or not, they still want to ensure that their financial outlay is money well spent. For businesses with deep pockets, creating an office that looks aesthetically pleasing might prove justification enough, but this is unlikely to be the case for most firms.

Fortunately, biophilic offices are not just about looking nice – there is substantial evidence that bringing natural environments to the workplace can actually improve employee wellbeing. According to The Economics of Biophilia, a report authored by Terrapin Bright Green, the productivity benefits of biophilic design are well known. A call centre in California, for example, invested $1,000 (€877) per employee to ensure they all had access to views of the outdoors. The productivity savings averaged $2,990 (€2,606) per employee.

“As the workplace has evolved, principles of biophilic design have begun to gain prominence as the resultant benefits, including reductions in staff stress levels and consequently absenteeism, have become difficult to ignore,” Alldred explained. “For example, integrating greenery and plants into the workplace leads to increased oxygen flow throughout the workplace, which in turn aids concentration among staff. In addition, many studies have shown that biophilic design can improve productivity, creativity, wellbeing and also helps to retain the very best talent.”

Not so long ago, prevailing wisdom indicated that it was a lean office, not a green one, that produced the best results. The consensus was that by stripping away anything deemed to be unnecessary, employees could better focus on their core tasks. Recent research has dented this viewpoint. While biophilic offices, complete with natural lighting, green spaces and views of the outside world, may require some initial investment, this will be more than repaid in terms of employee health and productivity benefits.

Growing pains
Although humanity’s longing to be part of the natural world has deep roots, modern life is getting in the way. Recent economic and social changes have resulted in more people than ever being detached from green spaces: 55 percent of the world’s population currently lives in urban areas, with this figure due to reach 68 percent by 2050, according to the UN.

As cities become more crowded, property developers and office designers will face increasing pressures to build high-density workspaces – greenery will become an afterthought, if it is thought about at all. With space at a premium, businesses may reject biophilic designs in favour of more minimalist offerings. This would serve as a short-term solution at best.

If offices prioritise space over all else, it would not only be to the detriment of productivity, but it could also damage employee wellbeing. According to research carried out by Harvard Business Review, 47 percent of employees feel tired or very tired due to an absence of natural light at work and 43 percent feel gloomy for the same reason. Similarly, other studies have shown that potted plants can lower blood pressure and reduce anxiety.

“Biophilic design is becoming more important as the prevalence of stress-related illness at work increases,” Alldred said. “It is one factor and it can help, but it must be utilised alongside a range of other initiatives designed to ensure the workplace experience is a positive one and that it is somewhere staff enjoy working.”

While biophilic design will become more important as urbanisation ramps up, offices should resist the temptation to incorporate natural elements on a whim – putting a cactus in the corner of a meeting room isn’t going to do much for staff wellbeing. Businesses should also consider how they are going to maintain living elements, as well as the potential risk of triggering employees’ allergies.

When carefully considered, however, the introduction of natural features into the world of work can prove hugely beneficial. The use of sunlight, natural materials and green elements will not only improve an office’s appearance; it may result in more creative, productive and happier members of staff. When businesses are considering how to redesign their premises, perhaps they should consider letting the outside in.

Source: European CEO
Image: Amazon Spheres by @siteworkshop,. More than just a nod to the outdoors, the Spheres creates an ecosystem of harmonious living between Seattle techies and 40,000 plants across 400 species.  Photo: @Stuartisett⠀