Dense landscaping with more than a thousand trees is planned for a green residential development dubbed "The Urban Forest" in South Brisbane.

Aria Property Group and Koichi Takada Architects have lodged a development application for the building they claim will be the "greenest residential building in the world".

Aria's development manager Michael Hurley says the building would set a new Australian benchmark, and he hopes over time Brisbane will be mentioned in the same breath as Singapore as a global leader in green buildings & sustainability.

"Cities like Singapore have been the international benchmark for green urban centres and sustainable architecture, targeting up to 200 per cent of site area covered by foliage," he notes.

The iconic design has been inspired by the best green buildings around the world, specifically the Bosco Verticale in Milan, Italy.

The development application contains a number of ground-breaking initiatives including;

Aria proposes a variety of tree species and planting to celebrate Brisbane's seasons with each façade tailored to respond to sun and wind seasonally.

A signature element of Aria's proposal is a public park under the building which follows a similar theme to Aria's Fish Lane Town Square re-development with neglected space converted to public realm.

The design also incorporates a floating canopy bridge meandering between columns and above the park to let visitors explore and adjoins an information centre.

"The information centre will be a unique focal point for the public with the ability to provide education on tree species, biodiversity, design and maintenance of the building," says Hurley.

"We want the Centre to promote the building and Brisbane as a global city, demonstrating what pioneering urban development actually represents." 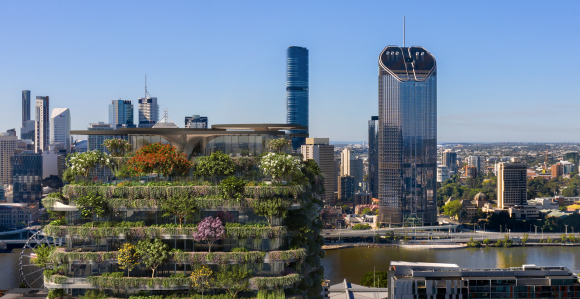 Apartments are designed to take advantage of Brisbane's sub-tropical climate with average outdoor areas in excess of 28m2.

"High ceilings, over-sized terraces and lush greenery embrace Brisbane's identity and encourage residents to enjoy their own backyard in the sky."

Aria has been a long-term investor in South Brisbane championing public realm initiatives including the Fish Lane Arts Precinct which houses restaurants, bars and cafes and is surrounded by public art, lighting installations, greenery and signage.

In late 2020 Aria expects to complete stage one of Fish Lane Town Square - a new public park, retail and event space in the heart of South Brisbane which converts 50 fenced off car parks into high quality landscaped public realm.