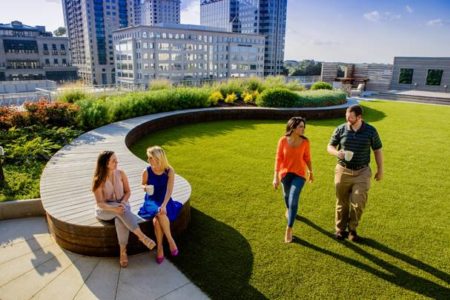 The green roof at SPANX headquarters in Buckhead.

One of HGOR’s most recent projects is a 40,000 square-foot green rooftop perched on the 6th floor parking deck at NCR Corporation’s new global headquarters on Spring Street in Midtown, just north of Tech Square.

“As we plan our growing city it seems wise and forward thinking to take advantage of every part of our outdoor environment, on and around our buildings,” HGOR Principal Chris Mutter said.

Any planted medium on top of a building is a green roof. Initially, they were built to reduce rain runoff, cool the building to provide energy savings, or for aesthetic beauty. Their recuperated savings more than offset the higher initial cost than a traditional roof. And nowadays, landscape architects like HGOR, see the potential to design green roofs as an amenity for those in the building.

“More and more companies to be competitive in attracting talent and retaining their own talent are finding large value in creating flexible work arrangements, which is really about taking your culture and expanding it outdoors,” Mutter said.

NCR’s green roof is set between two towers on the sixth floor, which is packed with amenities. In addition to indoor dining options, a gym, coffee bar and large lecture space, employees can head outdoors for meetings, to work independently or take respite among informal exterior spaces to spark creativity.

“We are very connected to the growing trend of the flexible work environments. Rather than traditional conference rooms – you and I could have a quiet conversation, to a group of 10, 20, 50 or more people – outdoors,” Mutter said.

HGOR achieved a similar concept on the green roof at the SPANX corporate headquarters in Buckhead. It sits atop the third floor of the building, adjacent to the interior dining space. Designed to accommodate a large event of up to five hundred, the space also breaks down into spaces for smaller gatherings.

“Access to green space improves peoples wellness and productivity. In a corporate environment – employees get a little reprieve, release their stress and feel stimulated and activated. To also have a place where people can take advantage of a nice day and get work done,” Mutter said.

Around Atlanta, green roofs also feature an amusement park like Ponce City Market, recreational space like Soccer in the Streets at the Five Points MARTA Station, and public spaces. Look for more of these, as they grow in popularity and more subsidies become available. Like HGOR’s next project, a public space on the top of the new Grant Park parking garage.

“It’s almost like Atlanta’s waterfront real estate. Perspectives or views of the city skylines that we wouldn’t otherwise have seen, are now being captured on these rooftop spaces,” Mutter said.