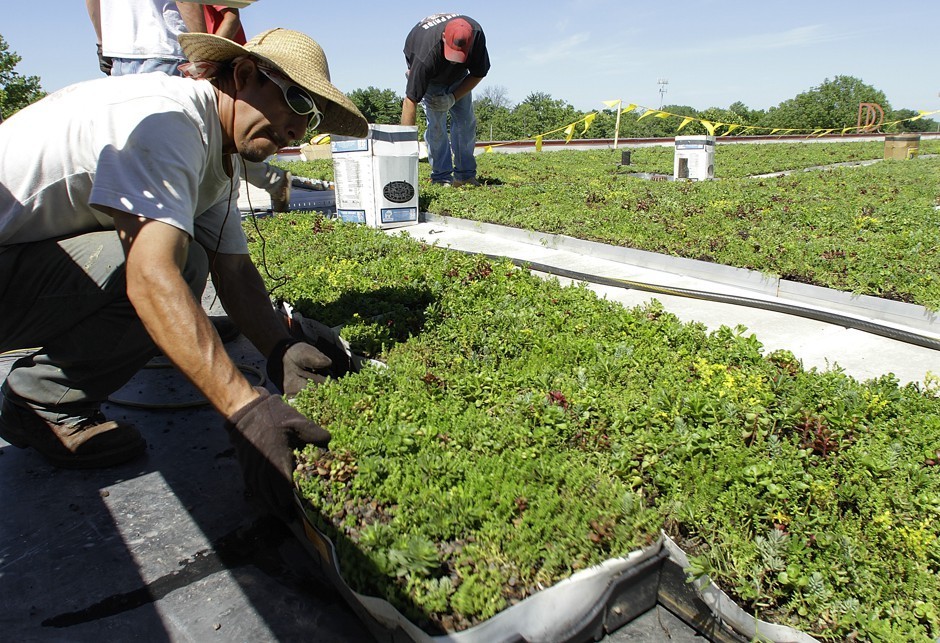 A study of decades-old German green roofs found that they don’t support a wide range of animal and plant life. But researchers and designers are trying to change that.

Every time Kelly Ksiazek-Mikenas scrambled onto a new green roof, it was hard to tell exactly where she was. The city below was definitely Berlin or Neubrandenburg, but the expanse of scraggly greens ahead of her looked a lot like the green roofs in Chicago, her home.

The only difference was that the German green roofs were much older than anything found in the United States: three to nine times older. Which is why the Northwestern University Ph.D. student in plant biology spent her summer there a few years ago.

The ability of plants to absorb and evaporate storm water, reduce a building’s energy use, and clean up some air pollution makes green roofs effective as a sustainable-building technique. They also just look nice. Germany began tinkering with green-roof technology back in the late 1800s, when owners of some buildings tried fireproofing with gravel, sand, and sod.

In 1975, German construction businesses got together to document the nitty-gritty construction standards. Their 2002 manual detailed everything from the ideal roof slope to the best soil depth and waterproof barriers. By the time Americans started experimenting with green roofs, their German counterparts were already professionals.

America’s green roofs were modeled after Germany’s. In both countries, the standard design is a thin layer of lightweight, low-moisture, and low-nutrient dirt blanketed by sedum, a hardy genus of succulent. Landscapers can easily install a roof of this type and check in on it once or twice a year.

“We ended up just copying what the Germans did,” said Ksiazek-Mikenas. By “we,” she meant the organization that defines American construction standards, which used the German protocol as a template in the early 2000s, as the green-building movement was taking off in the U.S.

The German model was dependable and low-maintenance. Why start from scratch, Americans figured, when someone else had done the stressful experimentation and developed the final product? Besides, even in cities that offered substantial financial incentives for green roofs, you got nothing extra for keeping them lush. Developers could follow the German method, stick hardy plants in a roof, and walk away, rewarded for their environmentally friendly choice.

Ksiazek-Mikenas wanted to know if green roofs ever come to host a wide range of species. American roofs were too young for her to tell. “As an ecologist, I realized a decade is such a tiny period of time as far as a succession of a plant community goes,” she said.

So she examined the diversity of 16 German installations that were between one and 93 years old. She collaborated with Manfred Köhler, a long-time researcher in the German green roof scene, who had monitored about a third of the plots at least once a year for between 12 and 27 years. The pair also closely studied 13 other roofs of different ages for one season. That way, they could measure how individual green roofs evolve, and approximate how one might look after nearly a century.

The results, published earlier this year in Urban Naturalist, make a case for breaking with tradition and investing more resources in green roofs.

As it turns out, the German plots stayed the same. Time didn’t translate into a broader spectrum of plant and animal species, just more plants overall. Rooftops receive more sunlight and wind, so as a precaution against weeds, green roofs are commonly given soil that holds little moisture and few nutrients. Species (like chives) that proliferated the most, the researchers found, could withstand the setting’s harsh conditions. “The survivors have traits that allow adaptation,” Ksiazek-Mikenas said.

Chuck Friedrich, a horticulturist and landscape architect, learned a similar lesson. As a member of the subcommittee drafting green roof recommendations in the U.S., Friedrich saw the German style adopted around the country, and tried it himself. After a decade of battling one test installation, he gave up maintaining the right balance of plants.

The hardiest plants, Friedrich realized, dominate green roofs. In subtropical North Carolina, where he lives, sedums dry up in the sun unless watered frequently. To Friedrich, a truly hand-off roof in the South must incorporate a range of native plants. If you’re dead set on the German approach, “it is maintenance, maintenance, maintenance,” he said, “and don’t let anyone tell you otherwise.”

Lauren Woodward Stanley, a Texas-based architect who has advised the City of Austin on green roofs, tests different species as alternatives to sedums. Not all make it—the blue grama grass died out, while red yucca thrives—but that’s part of working with plants. “If you really drill down [into] defining ‘exactly what you can expect,’ as if it’s a known quantity and not a living system, you’re discounting what it is,” she said.

There is rising interest in native green roofs, and Ksiazek-Mikenas is focused on finding native species that can tough it out on Midwestern rooftops. Going with native plants means choosing unpredictability, because little of this work has been done before—especially in Chicago, where the usual sedums do just fine. But it may be more ecologically rewarding than plopping down proven species.

For green-roof projects where experimentation isn’t possible, Ksiazek-Mikenas has advice on how to modify the German style for greater biodiversity. Start by planting the widest range of suitable plants possible, not just one or two kinds of sedum. Spend a little bit of time culling a species that’s taken up more than its fair share of the roof. Put up some bee nesting boxes or leave some decaying wood behind to encourage insects into a new home.

Individual green roofs are often small, but these slight changes can provide havens for species whose ground-level territories are fragmented or disappearing. “Even minimal is better than nothing,” she said.