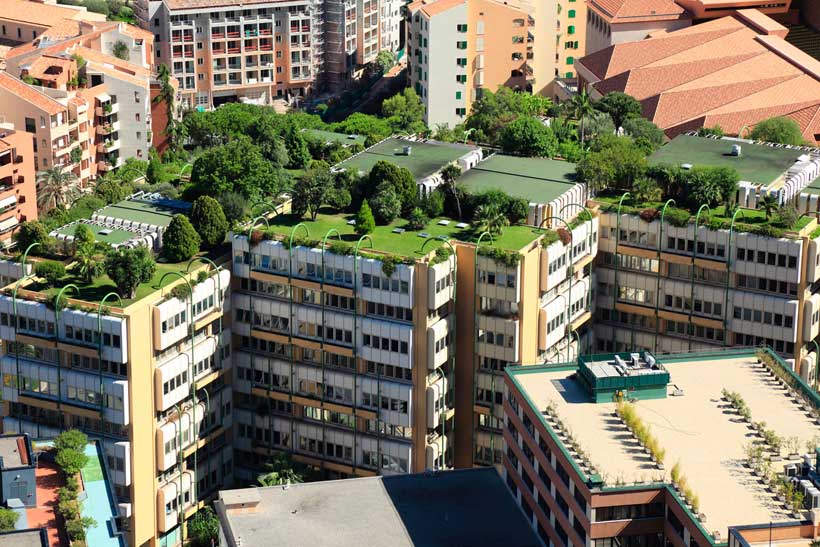 A 15% cut in the energy bill with a 40% reduction of the direct solar radiation in dwellings and a lower indoor temperature by up to 3 degrees thanks to plants grown on roofs, balconies and external walls. These are part of the outcomes of the Italian pilot project ENEA is conducting at its research center near Rome.

“We developed a green wall based on an extensive roof-garden system and a self-supporting structure positioned at 50cm from the wall of the School of Energies building, where we conduct training courses”, Carlo Alberto Campiotti at the Department Unit for Energy Efficiency, said. “Successively – Campiotti went on – we’ve begun to study the interactions among green coverings, energy flows, the microclimate and indoor comfort, diversifying the species”.

The “plant system” installed on walls, roofs and balconies, has proved capable of creating an actual insulating pad enveloping houses and condos; in this way vegetation can mitigate temperature peaks during summer, capturing most of solar energy, which doesn’t directly hit the building surface, dissipating through evapotranspiration of plants a large amount of thermal energy (up to 1 liter of water daily per square meter) which would otherwise be absorbed by the building and released as heat inside the house.

“In summer this vegetation system allows to reduce up to 15% of energy for cooling- Campiotti pointed out- while in winter savings for heating reach 10% thanks to the chimney effect between the wall and the vegetable blanket; in practice, a natural ventilation system removing moisture from walls and reducing the thermal dispersion of the building”. Each plant has its own type of leaf given by color, thickness, shape, arrangement on the stems and biological cycle, which determines the amount of solar radiation it captures instead of hitting the walls of the building.

The parameter defining the energy and bio-agronomic traits of plants is called green factor (kv) and it varies from a minum of 0 to a maximum of 1. In practice, if kv is 1, it means the green mantle doesn’t exert any shielding towards solar radiation and, in summer conditions, the temperature of the external wall is superior to both that of the air and that inside the building; but if the value is zero, it means that vegetation exerts a total shield and the temperature of the wall is equal to that of the air.

“The Pandorea Jasminoides variegata – Germina Giagnacovo at the Energy Efficiency and Productive Activities Department explained – is a climbing evergreen with an excellent ability of neutralizing solar radiation, as Lonicera hall prolific and Partenocissus quinquefolia do, although slightly less effectively”.

“In addition to an improved thermal and acoustic insulation and living comfort for individual dwellings, these solutions also have advantages for the entire urban context: green roofs and walls, in fact, contribute considerably to the reduction of the “heat island”, which can cause a peak of the electrical load during summer, between 3 and 8% for each additional degree of temperature.

Furthermore, less use of air conditioning means less greenhouse gas emissions such as CO2, methane, fluorinated gas and water vapor. Installing green roofs, balconies and walls also means mitigating the effects of the so called “rain bombs” – roofs and balconies account in fact for 20% of the total surface of cities and covering them with plants would allow to absorb up to 50% of rainwater, regulating its flow into the city’s water system- in addition to improving air quality, since 25 m2 of plant surface generate oxygen for one person, while 1m2 eliminates 0.2 kg of particulate matter in the air.

“For many sectors in distress in our economy, including the building sector, new prospects for recovering are opening up- Campiotti continued- also thanks to the introduction of the green bonus with the last Budget Law, a new fiscal incentive which allows to recover 36% of the costs, up to 5thousand euro incurred for re-greening single dwellings and parts of condos, an intervention which could increase the value of the building itself”.

“Extensive, mildly intensive and intensive are the three types of green coverings we’re experimenting with at ENEA- Susanna Mariani at the Department Unit for Energy Efficiency, explained. We are particularly interested in the experimental use of autochthonous varieties, such as climbers and evergreens, but also rare wild species such as Echium vulgare, also known as viperina grass, much loved by bees, which can guarantee maximum protection of biodiversity, adaptability to climatic variability and resistance to summer droughts “.

In detail, the extensive coverings are characterized by varieties of plants that are easy to grow (of the genus ‘sedum’, a set of various species of succulents, and perennials) that need little maintenance and rescue irrigation (mosquito-proof), since they can store a large amount of water. This type of roofing is particularly suitable for walls and slopes, since the installation reaches a weight of about 100 kg / m2. Intensive coverings, on the other hand, foresees the inclusion of trees, require high maintenance and increased irrigation, involving the installation of a weight on the building ranging from 400 to 1000 kg / m2, while the mild intensive is positioned halfway between the other two varieties of coverings, by type of plants and maintenance, weighing between 200 and 400 kg / m2

In September, at the School of Energies of the ENEA Casaccia Research center, the Energy Efficiency Department will organize a course on the cultivation of plants best suited for green coverings. The course is free of charge and is addressed to agronomists, land surveyors, architects, biologists and natural sciences graduates.