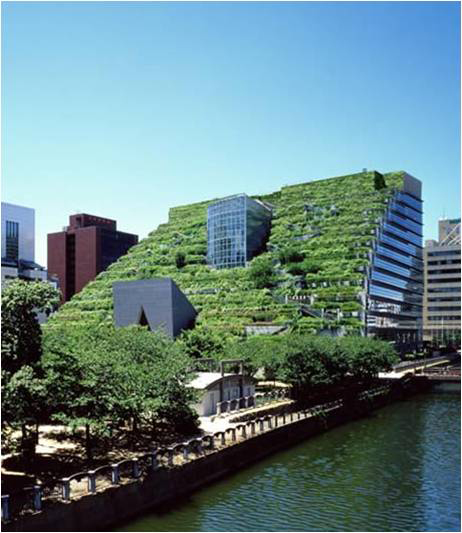 In 2020, the spectacular green architecture of the “Asian Cross Roads Over the Sea” – or ACROS – is celebrating its 25th anniversary. Located adjacent to Tenjin Central Park—the only green open space in that part of the city in Japan’s Fukuoka Prefecture—ACROS was designed by Argentinian architect Emilio Ambasz.

Emilio’s innovative research and vision began over forty years ago and his design philosophy is “the Green Over the Grey.”

In 1995, the nearly 100,000-square-meter multi-functional center was opened to the public. Fukuoka is the thriving hub of Kyushu’s economy, culture and fashion and ACROS is an open hub of international, cultural and information exchange whose architecture speaks with nature and has become a model of inspiration around the world.

“ACROS stands as a demonstration that “the dominant concept according to which ‘cities are for buildings and suburbs are for parks’ is wrong. It is too easy to relegate nature in the suburbs and leave greyness in the city. It is an idea that completely lacks imagination.” ~ Emilio Ambasz

Along the edge of the park, the building steps up, floor-by-floor, in a stratification of low, landscaped terraces which climb the full height of the building. Each terrace floor contains an array of gardens for meditation, relaxation, and escape from the congestion of the city. Culminating at the top terrace, the grand belvedere provides an incomparable view of the Bay of Fukuoka and the surrounding mountains.

The interior of the building extends on its surface of 97 thousand square meters and ACROS includes an exhibition area, a museum, a 2000-seat theater, congress rooms, government and private offices, a tourist information centre, shops and four underground levels.

In urban centers with a high density of population, the architect believes the interests of developers, the need of new buildings, and the need of open public green areas can be intertwined. And ACROS has indeed made a huge step forward by allowing a massive urban building to coexist with a public open space.

The symbiosis of these two elements was demonstrated by research conducted by Takenaka Corporation, Kyushu University, and the Nippon Institute of Technology. The building contributes to the reduction of the heat island that surrounds the area and to the reduction of energy consumption and of CO2 emission, allowing a 15-degree difference between the interior and exterior temperatures (Velazquez, 2011).

Ambasz has been called a prophet and a poet, and has been a trailblazer of green architecture since the seventies.

“Each building constitutes an intrusion into the vegetation, it challenges nature: we have to conceive an architecture that rises above the intrusion, that stands as an act of reconciliation between nature and buildings. We need to design buildings that are so intermingled with the surrounding landscape that one gets the idea that they are just the same thing.” ~ Emilio Ambasz

His message brings together technology and primitivism (Terence Riley, MoMa). Emilio creates “sophisticated heavens on earth” (A. Mendini), and still continues his poetical research in which the natural and artificial fuse together: “It is an ethical obligation to demonstrate that another future is possible. We need to affirm another model of life in order to change the route of the present.”

Emilio’s core idea is that of designing buildings that could “sing with a strong voice by keeping their mouth shut.”

“In order to build something that respects the environment one needs technology,” says Ambasz, “but in order to do real architecture one also needs art. We never have to think that the technological systems of a building that respect the environment and save energy are separate from the emotions generated by a work of art. If there is a drive in my ideas, it derives from the fact that I believe architecture to be not only pragmatic, but also emotional.”

At the inauguration of the ACROS Fukuoka Prefectural International Hall 25 years ago, 76 varieties and 37,000 plants were featured on the building. At present, they are lushly grown and have developed over time into 120 varieties and 50,000 plants.

Emilio Ambasz affirms that “seeing others using vegetation in their projects makes me realize that my mission is starting to show signs of development. Hearing some of them affirming the paternity of such ideas makes me feel like a mythologic character, even though I know that this is only a foreseen Freudian destiny.”

The work has influenced some of the most renowned names in contemporary architecture, from Renzo Piano to Jean Nouvel, to Tadao Ando. The latter has commented:

An iconic meeting point both for the citizens of Fukuoka and for visitors traveling in Japan, the ACROS Fukuoka Prefectural International Hall represents the building as a mountain, or a magical green pyramid rising to the sky