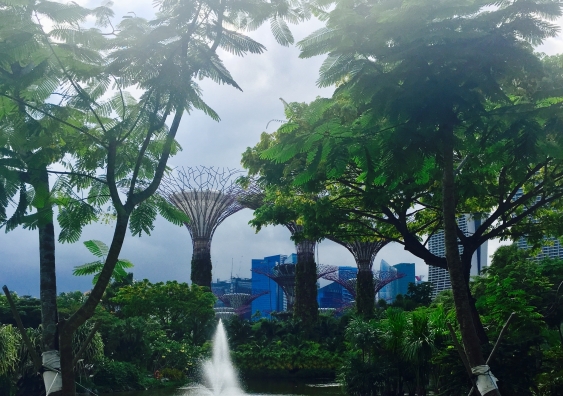 A review by Masters of Urban Policy students found that a new approach to green infrastructure that involves better funding and regulation is essential to keep pace with Sydney’s population growth and housing density.

The research comes on the back of the NSW Independent Pricing and Regulatory Tribunal (IPART) calling for public submissions to its review of the costs developers pay to provide water, sewerage and stormwater infrastructure to new developments.

“Often green solutions reduce the overall cost of stormwater in new developments, and keep maintenance costs down over the long- term.”

Lawrie and the researchers are calling on the NSW government and IPART to transition to a new way of valuing green infrastructure, with clear goals and established funding.

“All around the world we have found that when leaders get behind green infrastructure, it tends to happen. We see this in cities like Vancouver, Manchester and Singapore where leaders have taken a long-term approach to greening their cities, with big pay-offs both economically, environmentally and in community health and well-being,” said Lawrie.

The UK and the Netherlands have already shifted to systems that fully account for the costs and benefits of green infrastructure over the long term, and New York is saving almost $3.5 billion annually in meeting water quality targets by going green.

As housing costs skyrocket, developer contributions are even more contentious, said Lawrie, and could add roughly the same amount as stamp duty to the cost of housing.

“Developers pass these charges on to home buyers sometimes with mark-ups of up to of 400%," he said.

“Green infrastructure connects those vital blue and green spaces dotted around our magical city. Using developer charges to bring nature back into the way we service our suburbs with infrastructure can bring down the cost of housing.”

“Green infrastructure can be Sydney’s saviour. Our global competitors such as London, Singapore and Vancouver are all moving in this direction. We risk falling behind if we don’t go down this path,” said Lawrie.