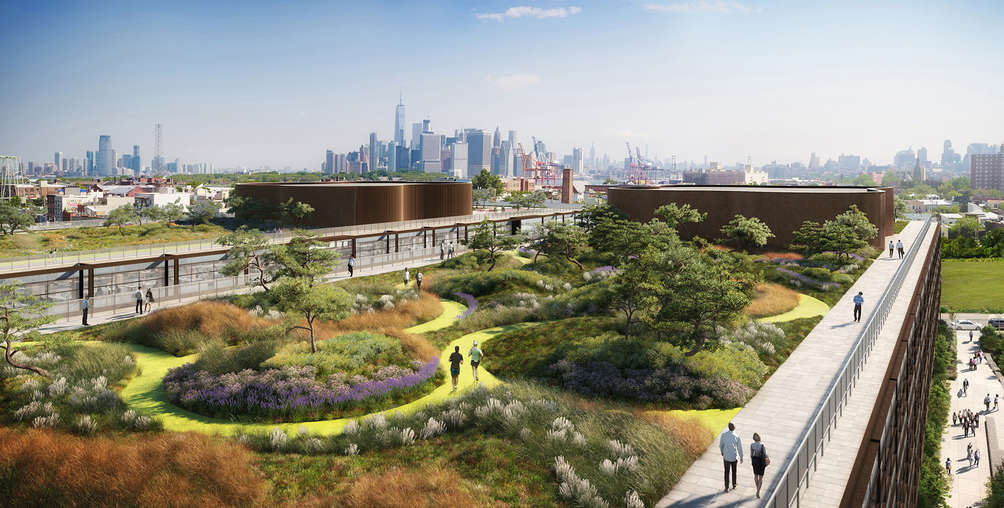 Construction on Norman Foster’s Red Hoek Point, a 7.7-acre commercial campus at the former Revere Sugar Factory, started in October and this week new renderings of the future office complex were released, as CityRealty first reported. Developed by Thor Equities and designed by Foster + Partners with SCAPE Landscape Architecture, the complex will be composed of two five-story buildings that will hold a combined 795,000 square feet of office space on three levels and 23,000 square feet of retail and restaurant space on the ground level. The new views provide the first look at the nearly four acres of green roof space, including walking and jogging paths and landscaping to mitigate stormwater runoff.

Sited between IKEA and Fairway Market, Thor has explained that the project’s name is an homage to the 17th-century Dutch colonial settlers who named the area “Roode Hoek” after its red clay soil. SCAPE was inspired by the maritime location and shaped Red Hoek Point’s 2,000 linear feet of shoreline with three unique edges and park experiences, including a kayak-launching pad and possible direct water taxi service.

The complex will feature a courtyard between the buildings which will accommodate cars and people via a series of “outdoor rooms” made of salvaged stone and reclaimed steel. The courtyard will terminate with what SCAPE is calling the “Basin Panorama,” a waterfront area where the ground will lift to enhance views of the Statue of Liberty and fall away to create tidal pools and walkways along the water’s edge.

In addition, 3.6 acres of green roofs will be planted, and out of that 1.8 acres will be available for recreational use, including walking and jogging paths.

As 6sqft previously reported, the structure will be the largest new heavy-timber structure in North America, and among the first modern, heavy-timber frame office buildings in the city. According to the leasing website, this will allow the building to generate 26% to 31% less greenhouse gas than a building constructed out of concrete or steel.