Green roofs for Australian cities would help reduce flooding and save on bills, study shows 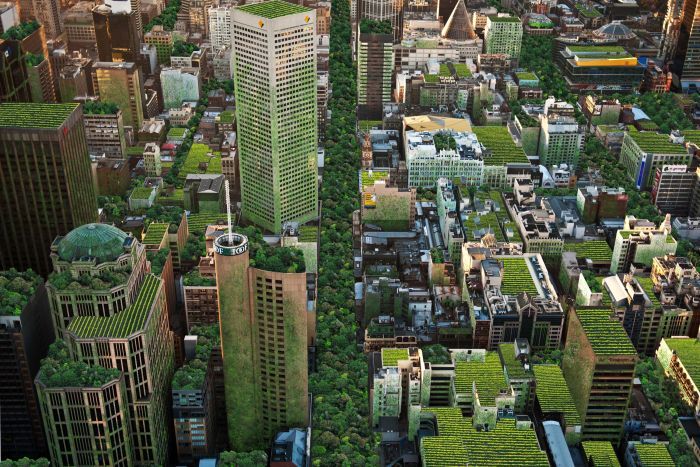 It's a bold vision for Australia's future.

The grey roofs of city buildings transformed into a green canopy.

City councils — including Sydney and Melbourne — have been nurturing the green roof concept for about a decade.

But progress has been slow.

Researchers have now published new data further measuring the benefits of these gardens in the sky in the hope that more developers and property owners will take up the idea.

The University of Melbourne's Dr Claire Farrell said her team found a 10-centimetre-deep substrate could absorb up to 95 per cent of annual rainfall in Melbourne.

"They keep that rainfall from going into creeks and rivers where they cause a lot of damage and carry pollutants."

She said Melbourne was helped by its "four seasons in one day" because light showers gave roof gardens the best chance of soaking up moisture.

The benefits of capturing run-off also extend to flood prevention.

"[It] can lead to flash flooding when we have big events in a short period of time."

Modelling for a single-storey brick office with a concrete roof shows potential savings of up to 65 per cent in heating and up to 35 per cent in cooling bills.

But what about a huge office tower?

"For energy savings by itself, you wouldn't add a green roof," he said.

"It'd be cheaper to add additional insulation to your building."

But he said when considering all the benefits, green roofs presented a compelling case.

"Energy and stormwater and biodiversity and human productivity benefits from looking out on a green space."

"Then the value of green roofs really comes to the fore."

The researchers said environmental and economic benefits would be similar for buildings in Adelaide and Sydney where the climate was not completely unlike Melbourne's.

But the precise findings for all Australian cities are yet to be established using the university's methodology.