Rain can fall through a cut-out in the concave roof of this London house extension by Tonkin Liu, animating a shallow pool of water beneath. 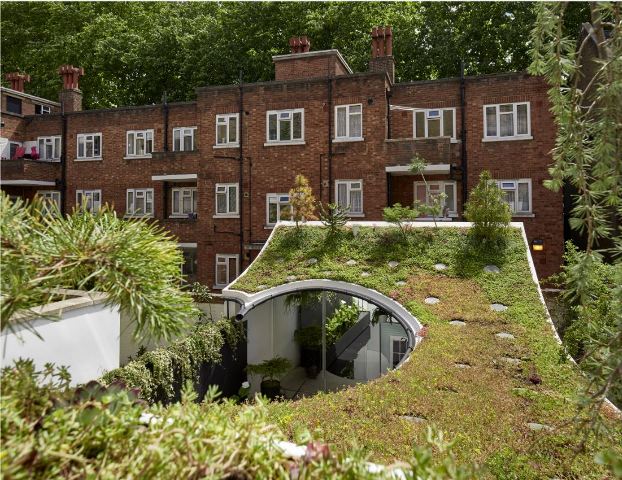 Called the Sun Rain Rooms, the extension sits at the rear of a Grade II-listed Georgian townhouse in Clerkenwell, which provides the home and office of Tonkin Liu founders Anna Liu and Mike Tonkin.

The studio worked to find a better use for the property's narrow back garden, hoping to create a work area at ground level and more living space in the existing basement.

"The front facade of a Georgian terrace is renowned for its formal and uniform appearance but the back has always been treated more loosely, often extended to suit the needs of its inhabitants over time," Greg Storrar, an associate at Tonkin Lui, told Dezeen.

"To respond to our own needs we have created a contemporary addition to the Grade II listed fabric."

"[The Sun Rain Rooms] is an architectural and landscaping project that plays with the idea of what a small, modern urban garden may be," added the project's planning inspector, C J Hoile. 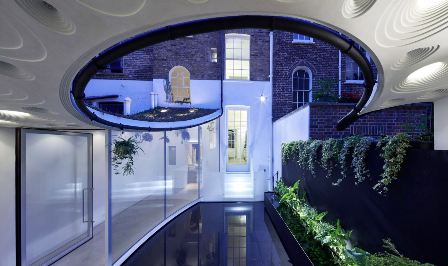 To begin, the architects crafted a layered plywood roof that spans the entire length of the garden. A sweeping curve has been carved out of its surface to match the position of the sun throughout the day and maximising the extension's exposure to natural light.

The underside of the roof is coffered with a CNC-cut pattern of tiered circles intended to mimic the ripples created by raindrops landing on the water.

A pipe that runs from the top of the house and along the edge of the roof's arc carries rainwater, eventually dispersing it into a harvesting tank.

At the push of a button the tank can be emptied to flood the tiled black patio, turning it into a pool. This water can also be used to irrigate the greenery on the top of the roof.

"As a studio we look to bring people closer to nature by embedding it in our designs, by learning lessons from the ingenuity of the natural world, and embracing elements nature offers us for free like the sun, wind and rain," explained Storrar. 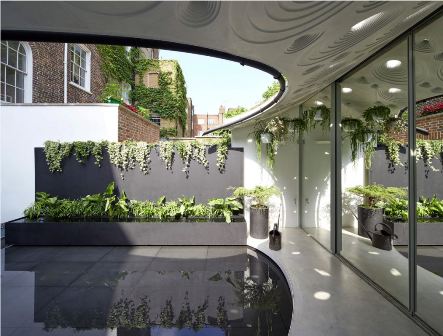 While the roof was erected in situ, glazed panels were crane-lifted into the garden to form the extension's short corridor.

It leads to a seating area where practice members can hold meetings, and is backed by a mirrored wall that conceals a small workshop, cooking area and storage. 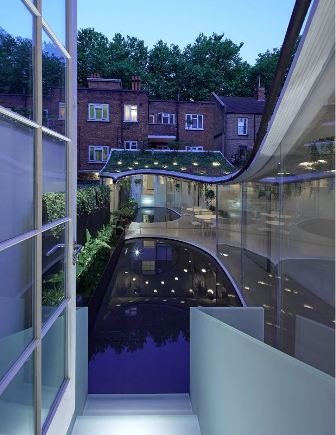 The Tonkin Liu team then expanded the property's existing basement, creating an extra bedroom and two bathrooms that run beneath the new garden extension.

This lower level is connected to the main house by an ornate black spiral staircase that sits within a plant-filled light well. The well is bridged over by a second set of steps, which the architects made from glass to ensure the space stays bright and airy.

Completed in a neutral colour palette, the bedroom includes a curved sleeping niche made from laminated pine which echoes the shape of the garden extension's roof above

The Sun Rain Rooms was recently announced as one of London's best residential extensions.