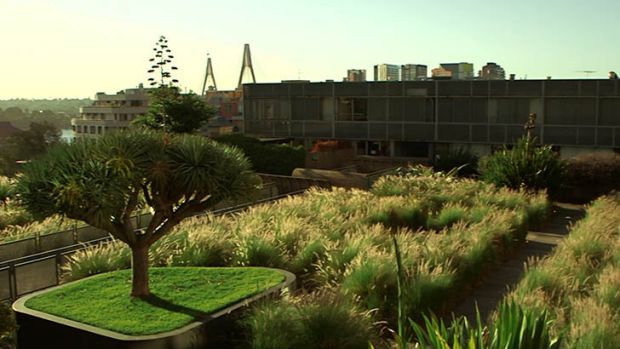 If there was ever any doubt about the need for green infrastructure to complement Sydney's building boom, the scorching heatwave that cooked the city earlier this month should have cured it.

In the first week of 2018, Sydney baked through 40 degree temperatures, while Penrith, in the city's west, clocked in at the hottest place on earth as the mercury hit 47.3 degrees.

The current apartment boom is likely to exacerbate what is known as the urban-heat island effect, where buildings and the surrounding concrete and asphalt streetscapes absorb and lock in the sun's heat.

At the same time, however, architecture and sustainability experts say there is now an unprecedented opportunity to harness Sydney's ever expanding rooftop coverage by making green roofs and walls a standard feature on new residential and commercial buildings.

However, they say a lack of proactive policy measures mean this opportunity is slipping through the hands of the NSW government and councils.

"In the absence of a proper evidence-based consideration of green space and green infrastructure, we're likely to see the slums of the future being developed," Dr Paul Osmond, director of UNSW's sustainable built environment program, said.

Scientific research has repeatedly recognised the insulation benefits of living infrastructure, such as green roofs and walls, in reducing energy consumption both in summer and winter, lowering energy and electricity bills as a result.

For example, a 2015 experiment, conducted at the University of Technology, Sydney, found that the process of retrofitting one of the university's roofs with succulent plants lowered the roof temperature by as much as 5 degrees.

A separate study by UNSW professor Mat Santamouris found the large-scale application of green roofs could lower the ambient temperature by up to 3 degrees.

Sara Wilkinson, from the UTS school of built environment, said about 32 per cent of horizontal surfaces in Sydney are rooftops, but the potential has remained largely untapped.

To read the remainder of this article, click here.