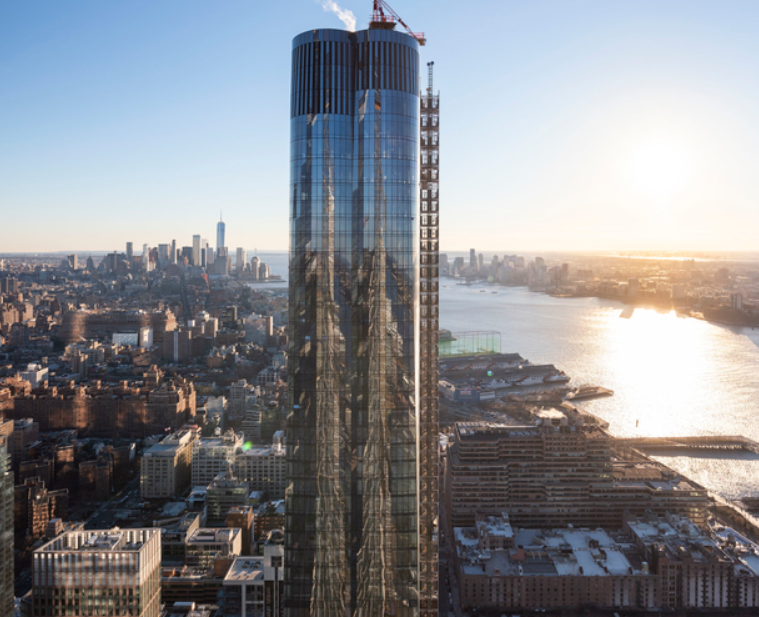 The New York mayor celebrated Earth Day by announcing a proposal that he claims would bar construction of many of the glass-and-steel towers that have joined the city skyline in recent years. The plan, which requires legislation in the City Council, is part of what he termed his own Green New Deal.

"Buildings got built that should never have been built to begin with, if we were thinking about the needs of our Earth," the mayor said. "So we are going to introduce legislation to ban the glass-and-steel skyscrapers that have contributed so much to global warming. They have no place in our city or on our Earth anymore."

The mayor described it as a ban, though he and his aides acknowledged that developers still would have ways to use lots of glass. They could, for instance, employ heat-retaining panes or compensate by reducing their carbon footprint in other ways. The aides cited as examples of proper "modern" use of glass walls the East Side's American Copper Building apartments and the Cornell Tech campus on Roosevelt Island.

But Mayor de Blasio went on a tirade against the modernist structures that have risen over the streetscape. In particular, he highlighted some of the edifices at the Hudson Yards project on the West Side.

"Those buildings were inherently very inefficient," he said. "You can imagine why: There's glass everywhere. There's, you know … everything they do to keep them hot or cold just goes right out through the glass, so you have to pump more and more energy to keep them at a certain level. Some of the ones at Hudson Yards are examples of the wrong way to do things."

A spokeswoman for The Related Cos., Hudson Yards' developer, touted the massive complex as carbon-efficient.

"Hudson Yards was planned as the largest LEED neighborhood in New York City," she said in a statement. "A first-of-its-kind microgrid powered by two cogeneration plants is estimated to reduce greenhouse-gas emissions by 25,000 metric tons of carbon dioxide annually."

She called 10 Hudson Yards, a glass tower, "one of New York's most energy-efficient Class A office towers." Its gas-fired micro turbines generate power, hot water and chilled water with twice the efficiency of standard systems, the Related spokeswoman added.

The mayor's plan to allow builders to surpass emissions limits by offsetting them through other means was criticized by the NYC Environmental Justice Alliance. "While such projects such as land conservation and forestry are important, these projects should not be considered an excuse to continue local fossil fuel-based pollution or experimenting with an unproven energy efficiency trading scheme for buildings," said a spokesman for the group in a statement.

But the problem with carbon-dioxide emissions is in the upper atmosphere, not local. It is not clear why a building that uses a lot of electricity or natural gas would exacerbate local air pollution.

The administration was otherwise light on details of its Earth Day package except to say that the legislation would amend the city's energy code, which establishes standards that developers must meet in order to build.

Much of the rest of the Green New Deal consisted of the Climate Mobilization Act, which the City Council passed April 18, and which the mayor must hold a publicly announced hearing on before signing. The legislation imposes emissions caps on commercial buildings and market-rate cooperatives and condominiums of more than 25,000 square feet, obligating them to undergo aggressive retrofits and change their energy consumption pattern over staggered periods leading up to 2050.

The mayor also said all city buildings soon will purchase all their power from the Canadian company Hydro-Quebec, which is in the midst of running the new Champlain Hudson Power Express transmission line to the five boroughs.

He also promised the city would expand its program for recycling organic matter and make it both universal and mandatory. At present only some neighborhoods have brown bins to dispose of food and yard waste, and compliance is voluntary. Participation has been sporadic, and the Department of Sanitation has been compelled to scale back plans for the program.

De Blasio's intonations about a Green New Deal—a term borrowed from left-wing Rep. Alexandria Ocasio-Cortez, who herself cribbed it from the Green Party—coincided with Gov. Andrew Cuomo signing legislation banning plastic bags and the Metropolitan Transportation Authority announcing it would lease roof space to solar-power developers.

The MTA said its has identified more than 100 bus depots, train yards, repair shops and commuter lots suitable for solar development. Panels on all that space would in theory produce more than 100 megawatts of emission-free electricity, enough to power 18,000 households.

They would also generate revenue for the transit agency, which would lease the real estate to companies that would install solar panels and sell the electricity they generate back to the grid.