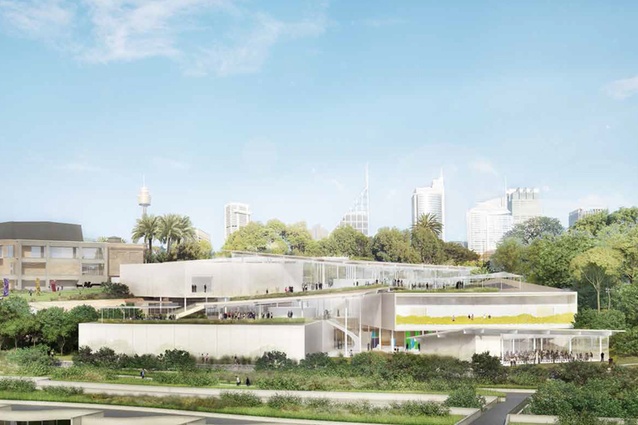 The final designs for the Sydney Modern project are a blueprint for turning a flagging Art Gallery of NSW into one of the world's great museums and connecting Sydney's icons, the state government will announce on Wednesday.

Arts Minister Don Harwin will unveil the final design for the $344 million Sydney Modern project that will add a new standalone building to a 145-year-old gallery whose visitation has been declining.

"An expanded Art Gallery of NSW will deliver significant benefits to all of NSW by injecting more than $1 billion into the NSW economy over 25 years," Mr Harwin said. "The [project] also creates an enhanced connection between two of our state's treasures – the Art Gallery of New South Wales and the Royal Botanic Garden."

The expansion will nearly double the gallery's exhibition space, a spokeswoman said.

The new project largely occupies space that is already under-used or disturbed, such as the land bridge overhanging the Eastern Distributor and disused WWII-era fuel tanks, the state government said.

It has been designed by renowned Japanese architects from SANAA, a firm previously awarded the Pritzker Architecture Prize, widely regarded as the world's most prestigious.

The addition to the gallery will address a lack of space that past presidents said was limiting its ability to host major global exhibitions and had left NSW's top art gallery much smaller than other states.

In recent years forced the gallery to remove displays of 19th- and 20th-century Australian art to accommodate blockbuster exhibitions.

But the announcement of the renovation sparked concerns from the Friends of the Botanic Gardens that the project amounted to a "land grab" of green space.

An environmental impact statement to accompany the development application for the design, to go on public exhibition for one month from Wednesday, warns the extension will have a "moderate adverse heritage impact" on the gardens due to tree removal and the "interruption of sensitive views".

But about 80 per cent of the new 7830-square-metre building will take up space over existing structures, according to the impact statement.

The addition of more than 500 square metres of rooftop gardens, improved landscaping, public art and better pedestrian access would compensate for use of unbuilt land and offset negative heritage impacts, the assessment concludes.

Heritage Minister Gabrielle Upton said features such as rainwater harvesting, minimal car-parking, solar panels and the use of seawater airconditioning would make the gallery the first in the nation to be awarded a five-star rating by the Green Building Council of Australia.

The use of "sensitive design" such as maintaining the gallery's existing entrance and keeping the new wing's below the existing building's facade would also minimise disruption, the state government said.

Construction on the new wing will begin in 2019 and is scheduled to be completed in 2021, for the gallery's 150th anniversary. The existing building will remain open.

The expansion means currently declining visitor numbers will grow from about 1.2 million annual visitors to 2 million, the state government said.