The largest urban rooftop farm in the world uses vertical growing techniques to create fruits and vegetables right in the center of Paris without the use of pesticides, refrigerated trucks, chemical fertilizer, or even soil.

Nature Urbaine uses aeroponic techniques that are now supplying produce to local residents, including nearby hotels, catering halls, and more. For a price of 15 euro, residents can order a basket of produce online containing a large bouquet of mint or sage, a head of lettuce, various young sprouts, two bunches of radishes and one of chard, as well as a jar of jam or puree.

“The composition may change slightly depending on the harvest,” Sophie Hardy, director of Nature Urbaine, tells French publication Agri City. Growing on 3.4 acres, about the size of two soccer pitches, atop the Paris Exhibition Center, they are also producing about 150 baskets of strawberries, as well as aubergines, tomatoes, and more.
Currently only a third of the total space on hall 6 of the expo center is utilized for Pascal’s alien-looking garden, and when the project is finished, 20 staff will be able to harvest up to 2,200 lbs (1,000 kg) of perhaps 35 different kinds of fruits and vegetables every day. 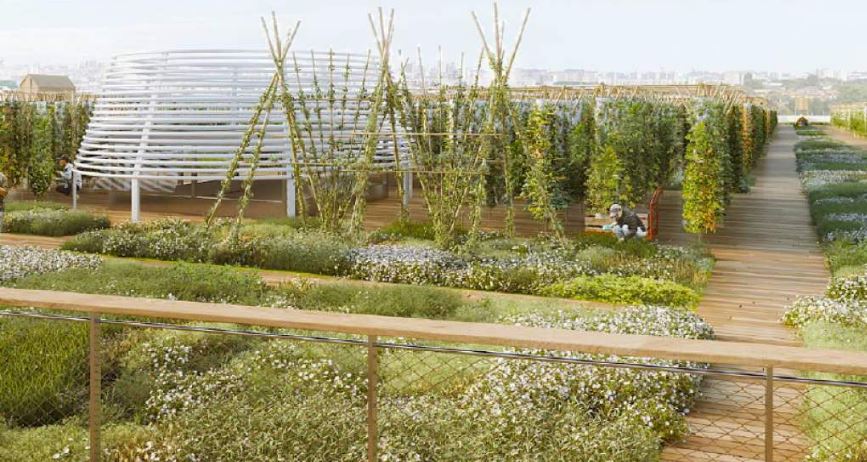 As strange as the pipes and towers out of which grow everything other than root vegetables might seem, Hardy says the science-fiction farming has major benefits over traditional agriculture.

“I don’t know about you,” he begins, “but I don’t much like the fact that most of the fruit and vegetables we eat have been treated with something like 17 different pesticides, or that the intensive farming techniques that produced them are such huge generators of greenhouse gases.”

“It uses less space. An ordinary intensive farm can grow nine salads per square meter of soil; I can grow 50 in a single tower. You can select crop varieties for their flavor, not their resistance to the transport and storage chain, and you can pick them when they’re really at their best, and not before.”

Growing on the roof and selling on the floor can play a big part in the production of carbon-neutral food because, according to Agripolis, fruit and veg on average travel by refrigerated air and land transport between 2,400 and 4,800 kilometers from farm to market.

The global transportation force is the largest of humanity’s carbon-emitting activities, and reducing the number of flights and truckloads of produce is a great place to start cutting the amount of CO2 entering the atmosphere.

For a culinary city like Paris, the Parisian mayor’s proposal to install an additional 320 acres (130 ha) of rooftop and wall-mounted urban farming space could significantly reduce the number of trucks entering the city, easing traffic and reducing pollution.

With rooftop farming being embraced from Detroit to Shanghai, the future is looking up.