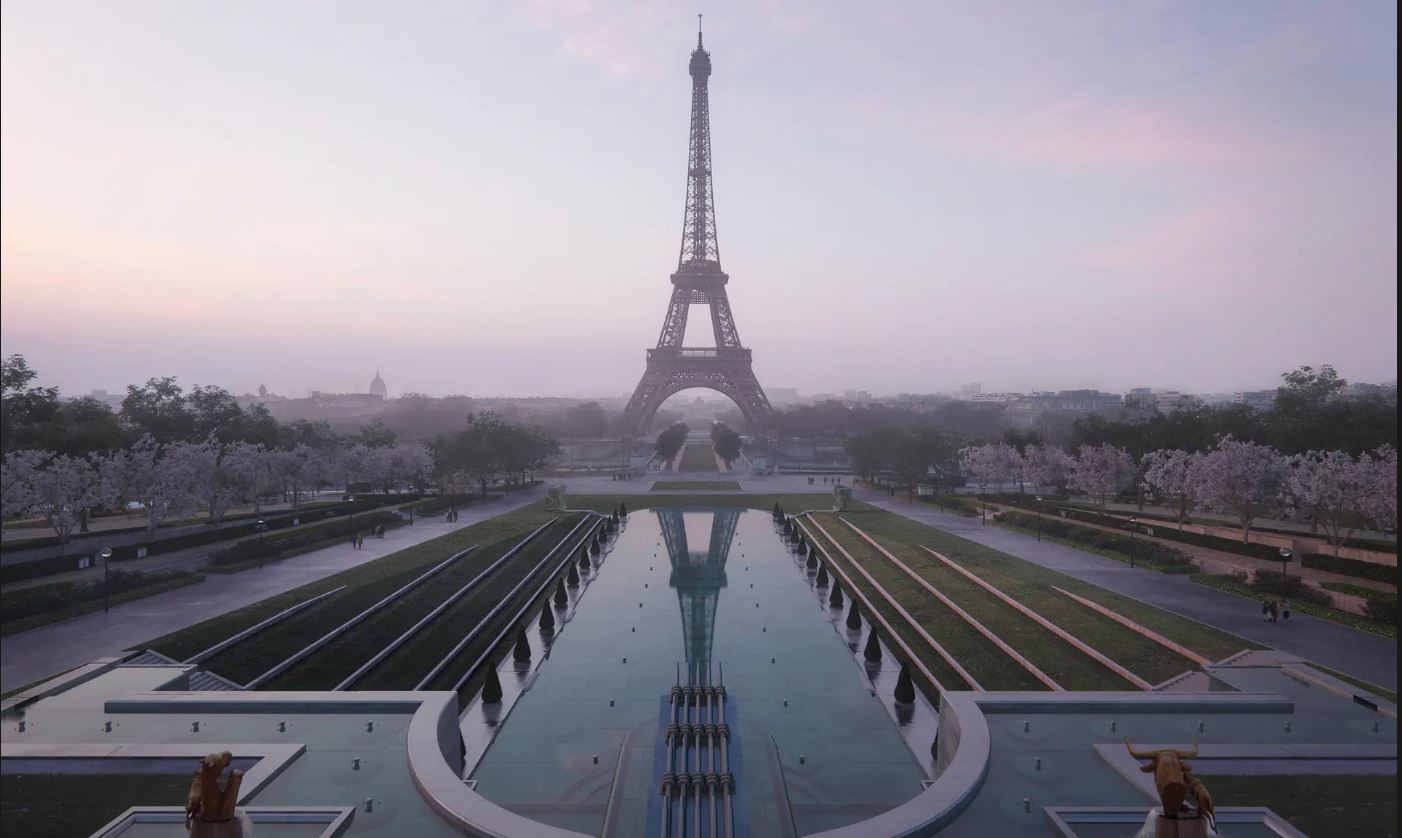 A garden stretches for a mile, free of cars with one of the world’s most recognisable monuments at its centre. Crossing the river on a tree-lined and lawned bridge, the roar of traffic has been replaced by the sound of water from fountains.

Such is the vision for the Eiffel Tower, which is at the centre of a major makeover project to transform one of Paris’s most visited districts.

At the heart of the revamp is a pedestrian-friendly plan to create the city’s largest garden. The landscape design, drawn up by a London-based company, will also turn a nearby bridge, the Pont d’Iéna, into a grassy, tree-lined walkway linking riverside gardens either side of the Seine with pools, fountains and mini-parks.

The first stage of the project, financed by the company that operates the Eiffel Tower, should be completed by 2024 in time for the Olympics.

It is the latest element in a concerted campaign led by the mayor of Paris, Anne Hidalgo, to reduce the number of vehicles in the French capital. Hidalgo, who faces re-election in 2020, has already closed long stretches of both riverside highways to vehicles. She has also revamped seven of the city’s major squares, restricting roads and giving more space to pedestrians, cyclists and scooters. She says she wants Paris to become a city “where you can let go of your child’s hand”.

“We’re really aiming for a high pedestrian target. We’re going to have a splendid garden where we can hear the birds sing,” she said when she announced the Eiffel Tower project last month. “It’s a place that will become a space for walking, strolling and breathing … Nature will take its place once more alongside this exceptional heritage.”

Mary Bowman, of Gustafson Porter + Bowman, which won a competition to redesign the area around the Eiffel Tower, said the aim was to unify the site from the Trocadéro to the École Militaire via the Palais de Chaillot, the Pont d’Iéna and the Champ de Mars to create a “biodiverse corridor”.

The Eiffel Tower has about 7 million visitors a year, though many millions more go to stand and look at the Dame de Fer, one of the most recognisable symbols in the world and an object of engineering beauty. The area around it, however, is less inspiring, comprising busy highways and the neat but soulless Champ de Mars, which has never quite shaken off its former use as a military parade ground.

The project plans to surround the tower with a mix of picturesque gardens and what the designers call “hard plazas” that could be used for a variety of public events throughout the year.

“Paris is the name of the climate agreement and to have a 54-hectare site in the middle of it that can show how one can begin to create a more green space in the heart of a major city and have it available and accessible to everyone, not just millions of tourists, is fantastic,” Bowman said.

“One of the things Anne Hidalgo mentioned about four of the shortlisted schemes was that they reinforced the idea of creating a pedestrian site so you could have this connection between the right and left banks. There is a phased approach. Creating pedestrian areas was a very strong part of our project.

“We would like to restrict private cars and turn it back to nature, but we are just beginning to enter into a period of discussions with the city and the traffic people about how that can be done.”

The Pont d’Iéna would be covered with lawns and the pavements either side would be turned into passages for public transport and emergency vehicles. The project includes the creation of facilities for tourists to drop off luggage in front of the Eiffel Tower.

The second stage, which will begin after the 2024 Olympics, is expected to be completed by 2030.

A public consultation has opened into the €72m (£64m) project and work is due to start at the end of next year or the beginning of 2021.

The lobby group 40 Million Motorists, however, has accused Hidalgo of wanting to turn Paris into a “museum city” after she announced plans to turn the four central arrondissements into a “restricted zone” for cars.

“Paris is not a museum. It is an economic heartland, where millions of people come, sometimes from far away, to work every day and need to do so easily … where will the mayor’s obsession with eradicating cars end?” it said in a statement.

It said the pedestrianisation of swathes of the city did not improve air quality but pushed pollution elsewhere. “All of this is just ideology,” it added.

Jean-Louis Missika, a Paris deputy mayor, said that city hall was determined to press ahead with schemes to reduce road traffic. He said cars took up half the public space, but only 13% of journeys were made in them and most spent 95% of their time in garages or parking spaces.

“All we’re doing is rebalancing the public space given to cars,” he said.

Missika said the city was working on introducing a car-sharing scheme following on from its pioneering bike rental scheme, Vélib’, and more recently, electric scooters.

“We have a lack of green spaces in Paris, which is a very dense city,” he said, adding that city hall aimed to create more public spaces from tens of thousands of square metres currently used for parking.

He said initial public reactions to the Eiffel Tower project were encouraging. “People seem to like it. A lot.”

Bowman added: “It’s a fantastic project also for raising the profile of landscape architects who should be leading the climate debate.”