PARKROYAL gets the Green Mark of distinction 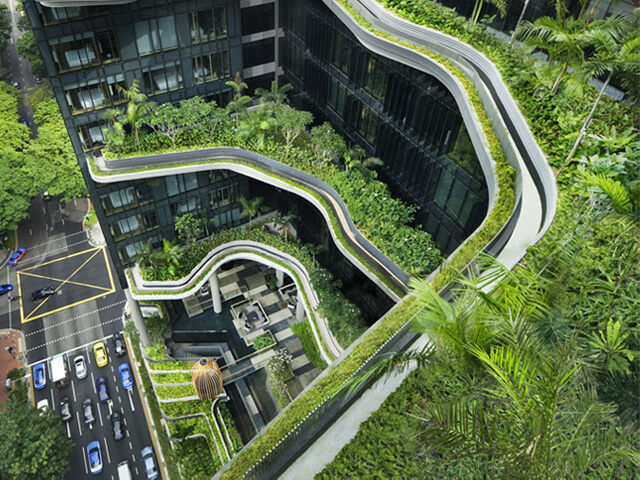 By adding plant-covered balconies and terraces around the exterior, the architects were able to create 15,000 square metres of greenery - around double the area of the site - and give every guest a garden view from their room window.

A diverse variety of species ranging from shade trees, tall palms, flowering plants, leafy shrubs and overhanging creepers come together to create a lush tropical setting which also encourages biodiversity. Rainwater collected from the upper floors irrigate planters on the lower floors and photovoltaic cells on the roof powers the lighting, making the skygarden zero-energy.

On the ground level, the contours create dramatic outdoor plazas and gardens which flow seamlessly into the interiors. Greenery from the park is drawn up in the form of planted valleys, gullies and waterfalls. The top of the podium is a lush landscaped terrace housing the development's recreational facilities, with infinity edge pools opening up unobstructed views of the city.

The PARKROYAL on Pickering was named best hotel interior at the Inside Festival and it has also been awarded Singapore's Green Mark Platinum, the nation's highest environmental certification. The hotel officially opened in January 2013.