The people building a green future 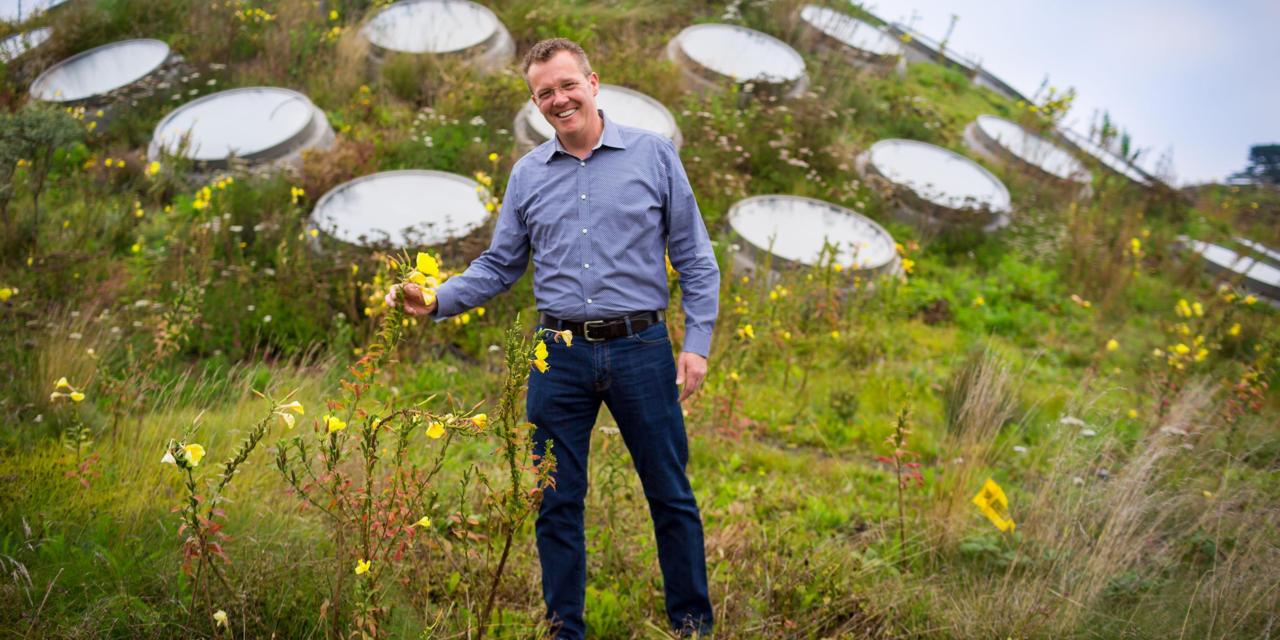 A series of rolling hillocks, spotted with blooming asters, chalky green succulents and clusters of wild strawberries rise up around Scott Moran. Butterflies flit from flower to flower as he watches a pair of red-tailed hawks teach their young to hunt from the hill tops. Moran is not on a stroll in the secluded countryside. Instead, he is standing on top of the building in the middle of San Francisco where he works every day, taking a short break for lunch. The bustling sounds city life assail him from all sides.

Moran works at the California Academy of Sciences, which is capped by 2.5 acres (1 hectare) of living roof where nearly 1.7 million plants, insects and birds flourish. The building has been painstakingly designed to be among one of the most environmentally-friendly in the world. Solar panels that surround the living roof provide 5% of the building’s energy, while water flowing through pipes in the bathrooms also generates power. Automatic skylights open and close to help regulate the temperature inside the building while natural sunlight is used to illuminate as much of it as possible.

During his 15 years at the Academy, Moran has helped design, build and now – as senior director of exhibits and architecture – maintain the building’s green systems. It is the type of role he believes is going to become far more important in the future.

“It is becoming much clearer that buildings need to be designed and used in a way to save as much energy and water as possible,” says Moran. “This requires some sophisticated technology and there is going to be a lot of demand for people with the skills to make this happen.” Constructing new environmentally-friendly buildings like the one Moran works in is expected to generate more than 6.5 million jobs by 2030, according to predictions by the International Labor Organization. Next to energy, it will be the second fastest growing sector for green jobs in the coming decades.

This jobs growth stems from a growing need for buildings that can cope with multiple challenges: meeting tough climate-change targets; rising energy costs, water shortages and an increased risk of extreme weather conditions. This is driving a movement known as green building.

Here, architects, engineers and construction firms try to create buildings that use as little energy as possible, generate their own power, recycle water and can heat or cool themselves without the need for air conditioning or central heating. New technologies are helping to turn dumb homes and offices into smart, environmentally-friendly structures.n 2000, just 41 new construction projects were officially rated as green buildings in the US. Last year, that figure had grown to more than 65,000. Elsewhere in the world there have been similar increasesand it is a trend that is expected to continue.

“Governments around the world have committed to limit global warming to 2°C as part of the Paris Agreement,” says Terri Wills, chief executive of the World Green Building Council. “Buildings currently generate around 38% of energy-related global greenhouse gas emissions. It means we won’t meet the 2°C target unless all of our buildings become greener in terms of the way they are constructed and operated.

“The construction industry is getting so much more interesting because of all the solutions that are needed to meet this challenge,” says Wills.

The building containing Wills’ own organisation – located in central London – is an example of the sort of features that could become standard in houses and offices in the future.

Many of the materials used in the building are recycled or come from natural sources, such as wood, in an attempt to reduce the carbon emissions generated in the construction process.

Specialist lighting adapts to the amount of daylight coming in through the windows, while solar energy heats the water used in the office bathrooms.

Certain occupations are likely to be more in demand than others too. The US Bureau of Labour Statistics expects there to be a 105% growth in jobs for solar panel installers by 2026, creating more than 11,800 jobs in the US alone.

In China the government has set aggressive goals as part of its five-year plan that require 50% of all new urban buildings to be green certified.

There will also be a need to make existing buildings more climate resistant,” says Nicolas Maitre, an economist at the International Labor Organization, who has been researching the impact green building will have on the economy. “In the UK, around 20 jobs will be created for every $1 million invested in existing infrastructure, while in China it will be around 200, and 160 in Brazil. These are going to be skilled jobs too.

“There will also be a lot of construction jobs created in the water sector as countries try to adapt to the changing climate. In Argentina, for example, its 15-year national water plan will result in 200,000 jobs.”

This growing demand for green expertise in the construction sector means many companies are already struggling to recruit enough people.

“On the engineering side we are struggling to recruit enough of the people we need,” says Alisdair McGregor, principal and mechanical engineer with Arup, who was also the lead engineer on the construction of the California Academy of Sciences building. “In the mid to late 1990s, green building was almost like a secret society of about 100 people going to conferences, but from 2000 onwards it has exploded. We are seeing a lot of major clients – both government and major corporate companies – who are wanting to do this.

“There is now a big demand for creative engineers to work on these projects. The architectural companies we work with are seeing the same thing.”

Alice Moncaster, an expert on sustainable construction at the Open University in the UK, hopes the demand for new skills in the construction industry will also encourage more women to take up roles within the sector.

“There is a shocking lack of diversity within the sector,” she says. “My hope is that the new skills [required] will both encourage more women in and allow them to thrive across the built environment professions.”

Entirely new jobs will likely emerge from the growing demand for green buildings. The International Labor Organization predicts roles such as eco-designers – who design products to be more efficient – and energy efficiency specialists will become increasingly important in places like China and India, where construction has been booming.

“We are going to see a need for people like emissions consultants, for example, who can assess the carbon impact of products in a building and help drive them down,” says Wills.

“There is going to be a huge demand in skills that have been largely specialised until now.”

To emphasis her point, Wills indicates another very visually green feature in her office – a wall covered in plants that help to clean the air inside the building. These living walls are appearing in a growing number of buildings around the world – One Central Park in Sydney, Australia has the world’s tallest vertical garden, while Google’s new headquarters in London features a huge green roof.

“We have specialist staff who come in to work on our living wall,” explains Wills. “It is fascinating because how do you water and nurture plants growing on a vertical surface?”

Moran too sees green buildings as requiring new skills that have not featured much in the building sector in the past.

“It takes a different skill set to look after a living roof compared to normal landscaping,” he says. “You need to understand the environment, how the direction of the sun and wind will affect it. But we are also seeing technology being integrated into everything.

“Our entire building is controlled by a central computer system so we can now walk around with an iPad and make real time adjustments.

“That is something that is only going to become more of a feature in buildings in the future.”