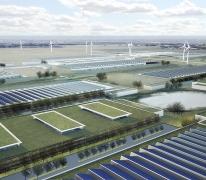 A new study has made the case for Australian governments to increase green infrastructure in urban areas to mitigate some of the effects of climate change, improve public wellbeing, and protect infrastructure.

The research undertaken by Monash University researchers and released by the Australian Conservation Foundation last week is the first study to examine the cumulative effects of future climate change, and a phenomenon known as the Urban Heat Island (UHI) effect at local government level across Australia’s three largest cities.

The paper predicts that hot summer days in Brisbane and Melbourne will regularly reach more than 40°C by 2060-2080, and up to 50°C in Sydney, if preventative action isn’t taken. While the UHI effect will likely see the temperature rise even higher than these figures, the presence of green infrastructure could help cool cities.

“[Green infrastructure] is one of the simplest ways to reduce the UHI effect,” the report said.

“Trees, shrubs and even grass help reduce the amount of heat in urban areas in different ways such as by absorbing sunlight, releasing water vapour that evaporates and cools the air when they ‘breathe’, and shading surfaces that would otherwise store and release heat.”

Heatwaves kill more Australians than any other natural disaster, and will become more severe with the changing climate, according to report co-author and Monash University researcher Dr Lucy Richardson.

The report noted that the suburbs most vulnerable to severe heatwaves are typically disadvantaged and have lower levels of vegetation. It has argued that greening these urban areas can reduce the severity of heatwaves, among other benefits.

“Not only is expanding our urban vegetation good for reducing heat-related deaths, but it can create jobs (helping with COVID-19 economic recovery), provide habitat for our native wildlife, and help address climate change by absorbing more carbon dioxide from the air,” it said.

“All infrastructure faces additional and costly repair and maintenance work as a direct result of heat stress,” it said.

“Reduction of infrastructure lifespan over the long term is likely as higher temperatures increase the heat stress on buildings, roads and railway lines.”

The research has shown increasing urban vegetation will become “essential” for Australia’s three largest cities — Sydney, Melbourne and Brisbane — to reduce serious heatwave impacts by 2060-2080, according to Richardson.

“Natural infrastructure takes time to establish to its maximum effectiveness, so acting early is critical for meeting future needs,” she said.

The paper has made a number of suggestions to state, territory, and federal governments, including aiming to reach net zero greenhouse gas emissions by 2035 and protecting existing critical habitats and ecosystems in cities.

Recommendations for the commonwealth included:

In launching the report, the ACF’s campaigns director Paul Sinclair called on governments to act.

“Decisions made by Australian governments in the coming months will either lock in permanent and escalating damage to the ecological systems that sustain human health and livelihoods, or they will promote a healthier, fairer and greener world,” he said.