Rooftop Farming Is More Than a Green Thumb’s Urban Fantasy 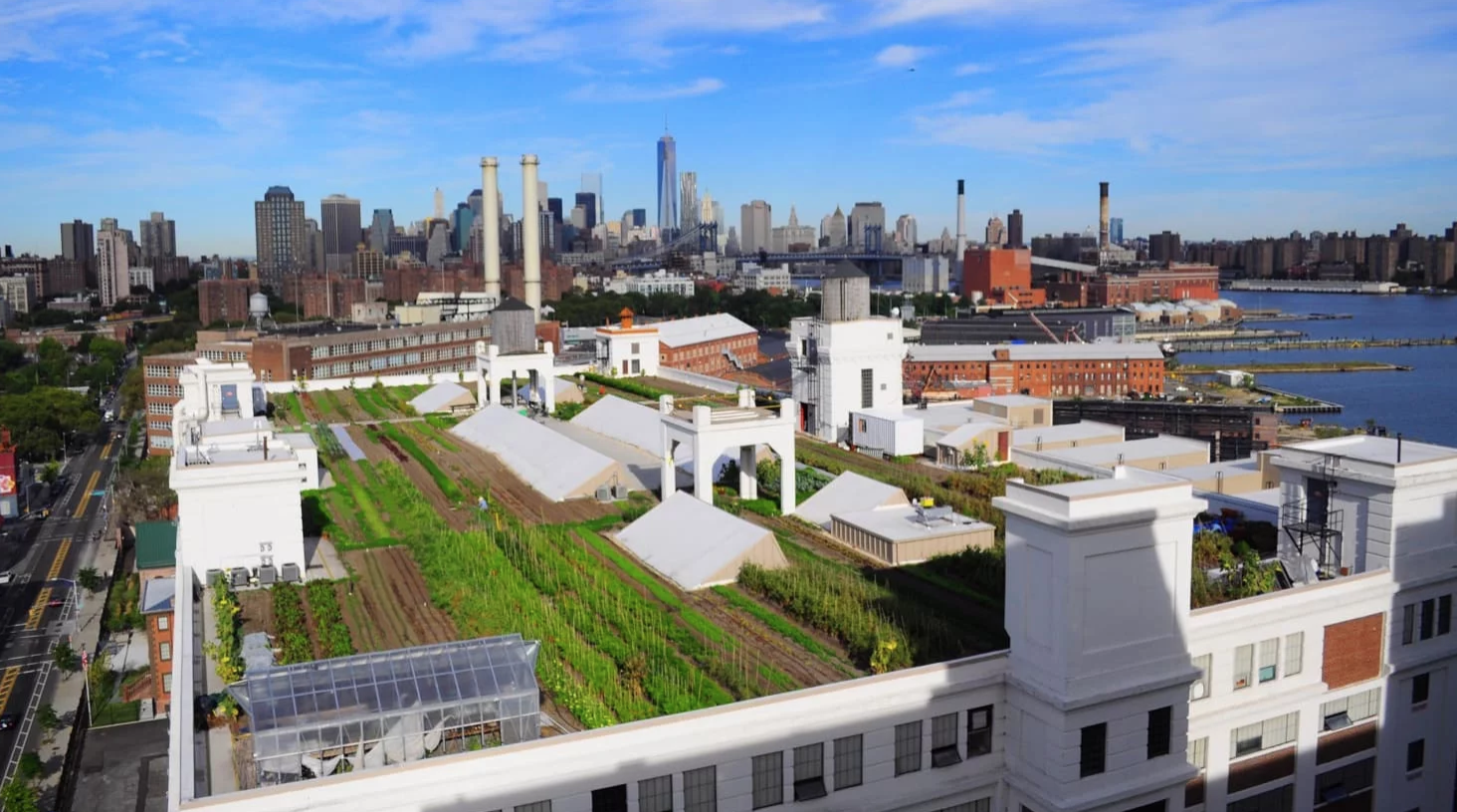 In the heart of a city, traditional agriculture has some drawbacks.

Large farms can’t fit inside bustling metropolises, so produce has to sometimes travel great distances to get to your table. That means degrading the quality of produce and, even worse, releasing carbon into the atmosphere as trucks cart food to their final destination. But as “eat local” has become a mantra for creating a healthy planet, farmers have been trying to figure out how to bring their operations closer to the city.

With every single inch of land in increasingly crowded cities going for top dollar, creative farmers have started following the most common real-estate principle: build up. That means farms have started appearing on rooftops across the world. And they’re not just benefitting local waistlines with fresh produce, they’re also improving the health of city-dwellers by helping the environment.

Brooklyn Grange, for example, is the largest rooftop farming operation in New York City. They’ve been growing veggies on rooftops in the city since 2010. Ben Flanner, president and director of agriculture at the farm, says that any method of greening rooftops can help a city be more environmentally friendly. One way is with water recycling and flood mitigation. “There are overflows [in the city] whenever we get a substantial rainstorm because all of our impervious pavement and surfaces generally all flow into the same system where our toilets and sewage system goes. It massively increases the strain on our water treatment systems when we get heavy rainstorms. So basically making certain surfaces more like a sponge between green roofs—plus other ways to slow down or manage our storm water—is very valuable and reduces flooding and overflows in the sewage system.”

Additionally, green roofs are energy saving. The canopy created by plants growing on the roof creates a cooling effect. Instead of the standard black tar rooftops, which collect heat from the sun and warm the building, the green roof “reduces the amount of energy that is required to cool the building below us and it also cools the surrounding air,” Flanner says. This, in turn, can make a building much more energy efficient. Scaled up to larger projects, and more of them, green roofs can help reduce energy use throughout a city.

Not to mention the fact that having green spaces in a city are a boost to the emotional health of the people who live there. Brooklyn Grange has regular farmers markets and weekly open houses at its Queens location in Long Island City where people can participate in tours and activities that, Flanner says, “demonstrate to the public how food is grown, how food systems work, and create conversations.”

Rooftop farms also reduce their carbon footprint by using smaller, more energy efficient technologies to plant and harvest. One of their tools, called the Tillie, is a lithium-ion battery-powered cultivator. It performs the task of shallow soil tilling, which farmers use for weeding and prepping their beds for planting. On a typical ground-based farm, this task would be done by a gas-guzzling tractor.

Brooklyn Grange is one of many rooftop urban farms around the world. And the popularity of these operations is growing. Flanner says they regularly consult on new national and international projects. And they’re growing their own operation as well. Though they’ve already provided a total of 50,000 pounds of produce to restaurants and residents since the opened, they’re getting ready to start up a third farm— and they’re working on non-veggie centered green rooftop projects around the city.

The process, he says, is about inventing a new business model that has never been done with farms before: “It is not a super easy model and it hasn’t been scripted or paved the way by somebody else. We’re constantly out here inventing new systems and processes and running it as efficiently as possible.”