The cities we live in can sometimes feel cramped, with green space and fresh air a rare and valued commodity.

While large parks can offer respite from the day-to-day grind of urban life, it’s sometimes hard to make time to visit them for exercise and relaxation.

It’s within this context that the notion of walls covered in plants and shrubs could offer a bridge between the highly urbanized environment of a city center and the expansive green space of a park.

Just last week, the City of London Corporation announced that it had granted planning permission for a “living wall” on a building located a stone’s throw from the River Thames.

Slated for completion next year, the five-storey wall will use recycled aluminum and compost derived from garden waste that has been recycled.

The scheme has been designed by Red Squirrel Architects for PSR Agency Limited. According to the City of London, Veolia U.K. — a firm which specializes in energy, water and waste management — will supply the aluminum for the project.

This will be turned into “modular honeycomb panels” that will be “hung within a grid of recycled steel girders.” The recycled compost will be used for planting.

In a statement issued last Thursday, Miles Griffies, a director of Red Squirrel Architects, said there were “clear and obvious benefits to our urban landscape in adopting circular economy principles, recycling, and urban greening.“

Around the world, a wide range of projects to green the facades and roofs of urban buildings have been developed. These include Bosco Verticale, or Vertical Forest, a residential development of two towers whose exterior is covered in plants and trees. 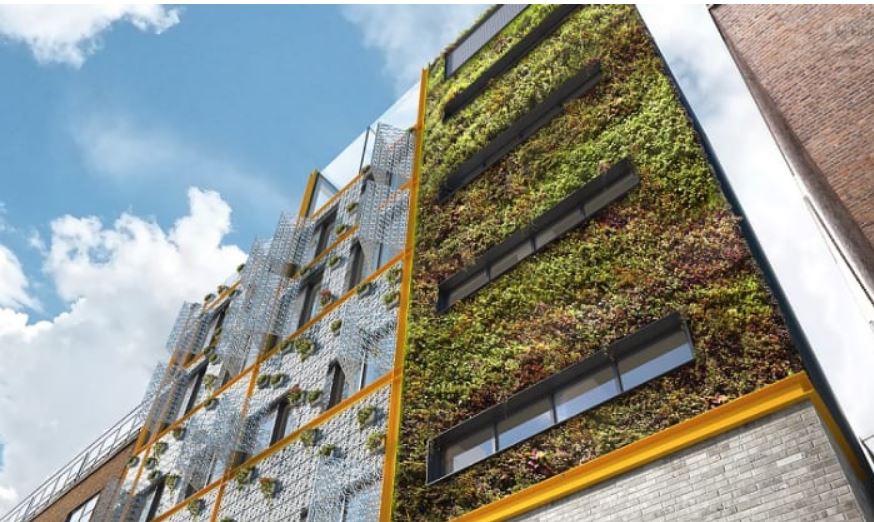 In Canada, the Vancouver Convention Centre hosts a six acre “living roof” that boasts over 400,000 “indigenous plants and grasses from 25 different plant species of the Pacific Northwest.” According to the Centre the roof “acts as an insulator”, helping to cut heat gains during the summer months and lowering heat loss through winter.

London itself is already home to some interesting examples. These include a living wall at the Athenaeum Hotel. The wall, designed by French botanist Patrick Blanc, goes up to the 10th floor of the building and uses a range of plants.

Outside the U.K. capital, a 200-foot long “green pollution barrier” was installed at an elementary school in Sheffield, northern England, toward the end of last year. The idea behind the BREATHE barrier, as it’s known, is to act as an air pollution filter from road traffic.

Leading the scientific research on the project is María del Carmen Redondo Bermúdez, a PhD student at the University of Sheffield’s Grantham Centre for Sustainable Futures. In a phone interview, she told CNBC that the barrier had “two key layers.”

In a statement issued last November, when the installation of the barrier was announced, she referenced a third layer of shrubs and herbaceous plants that were described as being “able to catch particulates, whilst also looking attractive.”

As part of the project, del Carmen Redondo Bermúdez will take nitrogen dioxide and particulate matter measurements to assess the impact of the barrier, with a full report set to be published next year.

She was also keen to stress the importance of adapting projects to their local environment.

“When you use plants for air pollution mitigation you have to be very, very careful, because in some cases you can make it worse,” she said.

“You have to really think of the design: of where the wind is blowing, of which plants ... you are using, the wind directions, because you want to create an area that is cleaner.”