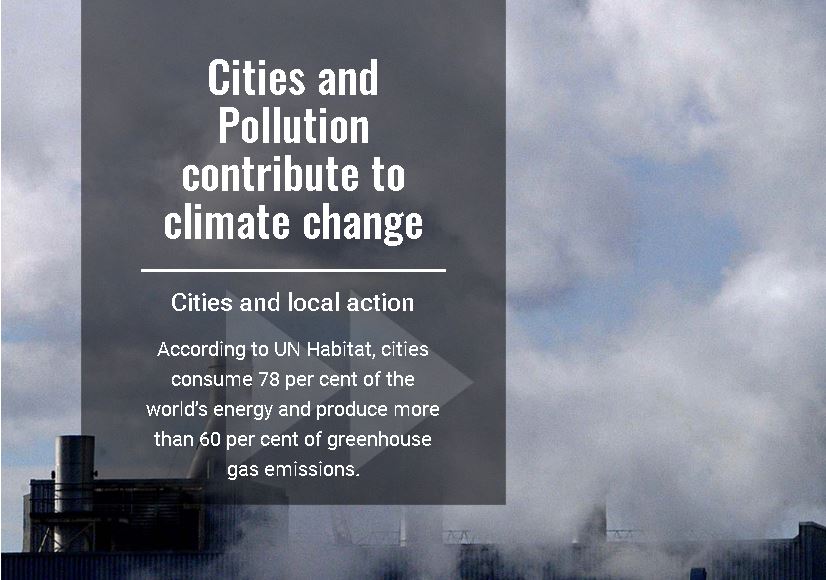 Cities are major contributors to climate change. According to UN Habitat, cities consume 78 per cent of the world’s energy and produce more than 60 per cent of greenhouse gas emissions. Yet, they account for less than 2 per cent of the Earth’s surface.

The sheer density of people relying on fossil fuels makes urban populations highly vulnerable to the effects of climate change. Fewer green spaces exacerbate the problem. According to the IPCC report, limiting global warming to 1.5 degrees Celsius would “require rapid and far-reaching transitions in uses of energy, land, urban and infrastructure (including transport and buildings), and industrial systems.”

An added challenge is the projection, in a UN report, that another 2.5 billion people will reside in urban areas by 2050; nearly 90 per cent of them in cities in Asia and Africa. The good news is that cities around the world have already begun to take measures to reduce greenhouse gas emissions and are putting policies in place that encourage the use of alternative energy sources. Efforts by policy makers and administrators to address climate change, however, will need to accelerate to keep pace with population growth and the rapid climate change.

The effects of climate change are worse among poor and low-income communities, in part because many live on the margins of society, in unstable structures, and in areas more susceptible to flooding, landslides, earthquakes, but also because of inadequate capacities, inadequate resources and reduced access to emergency response systems. This is even more pronounced in developing countries.

To address the issue of climate change in cities, UN-Habitat, UNEP, the World Bank and Cities Alliance have established the Joint Work Programme to assist cities in developing countries to mainstream environmental considerations into urban policymaking.

In Jamaica, UN-Habitat’s Cities and Climate Change Initiative (CCCI) helped people understand “planning as a long-term tool for climate compatible cities.” The programme, through partnerships with the local administrators and activists, has fostered communication within the community so that residents become informed on climate-resilient activities.

Pollution, mostly associated as a by-product of urban landscapes, is also linked with climate change. Both climate change and air pollution are exacerbated by the burning of fossil fuels, which increase CO2 emissions, the cause of global warming.

In October 2018, the World Health Organization (WHO) said in a report that 93 per cent of the world’s children breathe toxic air every day. According to the report, 1.8 billion children breathe air that is so polluted it puts their health and development at serious risk. WHO estimates that in 2016, 600,000 children died from acute lower respiratory infections caused by polluted air. The report highlights that “More than 40% of the world’s population – which includes 1 billion children under 15 - is exposed to high levels of household air pollution from mainly cooking with polluting technologies and fuels.” In developing countries, women frequently rely on coal and biomass fuels for cooking and heating, putting them and their and their children at higher risk to the effects of home pollutants.

WHO recommends and supports the implementation of policies to reduce air pollution, including better waste management, the use of clean technologies and fuels for household cooking, heating and lighting to improve the quality of air in homes.

The reduction of greenhouse gases and air pollution is one of the goals of the UN Environment’s Share the Road Programme, which encourages walking and cycling. The agency endorsed an award-winning bike-sharing scheme in Hangzhou, China, which started out to provide public transport, but ended up alleviating traffic congestion and drastically improving air quality. “Hangzhou is a great example of how cities can introduce initiatives like bike sharing to encourage people to get out of their cars and reduce air pollution,” said Rob de Jong, Head of UN Environment's Air Quality and Mobility Unit. Together with the WHO and the Climate and Clean Air Coalition, UN Environment is part of the global Breathe Life campaign, helping to mobilize cities and encourage individuals to protect the planet from effects of air pollution.