The Victorian Desalination Project (VDP) has been established for two years now and growth of endemic plant species on this green roof has been strong. By all accounts, this green roof project has been both a success in development of low profile extensive metal deck roofs, and the use of endemic plant species on a large scale. The VDP does require harvested stormwater for irrigation to make a successful green roof on the 180mm soil profile. It does also require a high performance low organic, mineral based soil mixture for providing the best growing conditions for the plants and a soil mixture that is durable with minimal breakdown.

High levels of wind shear were expected for the site. These were factored in by designing in the use of a stainless steel mesh over soils, to mitigate lifting of the stone mulches and plants. Planting design incorporated zoning these areas and incorporating plant species from high wind shear habitats. Wind exposures have been measured on two separate storm events, post installation, achieving 115km/h speeds. Damage was minimal-to-none, notably with no shift in mulches or the soil profile.

Luckily, extreme wind exposures on green roof were incurred after sufficient plant establishment had taken place, to allow groundcover species to root at internodes and aid in wind stabilisation.

Over a two-year period, species colonies and composition have naturally altered to suite exposures, in terms of wind and sun. Very high exposure areas have transitioned to predominantly low-growing groundcovers, tussocks, compact shrubs and ephemeral forbs.

Severe hot and dry periods did impact the green roof garden within the first year, presenting minor die-back. Regeneration rates were high, allowing for virtually complete regeneration by the second year. Certain aspects proved to be exposed to dryer winds, whilst others proved notably more protected, each respectively presenting a natural alteration to the plant species composition, as a coping mechanism.

Species dominances have shifted more so in high exposure areas, with one large section slowly reducing to a Carpobrotus/Tetragonia combination to great effect. This is interesting as this dominance also predominates in the secondary sand-dune zone within local EVC's. Therefore, the roof is showing a directly comparable response to surrounding habitats (coastal dunes).

The successful use of these particular indigenous species lies not in the assessment of each species in isolation for suitability for green roof use, rather in the ecological functioning of all plant species in unison. Dominances, reductions and re-colonisation, are providing coping mechanisms to a plethora of exposure challenges, and are integral to this Australian green roof design solution.

Initially viewed as a risk, the green roof has proven to be one of the most successful elements of this challenging project and represents the growth of the green roof industry in Victoria. 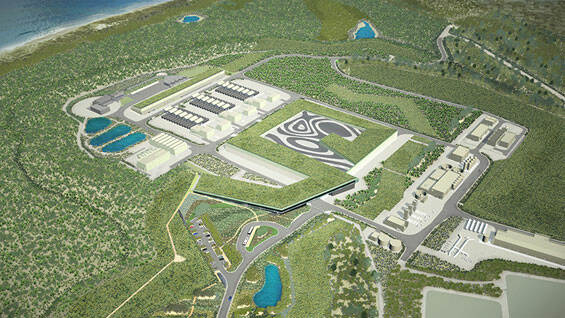 Graphic depiction of the Victorian Desalination Plant design shows how the green roof blends into the surrounding environment.
Image is courtesy of ASPECT Studios and Fytogreen