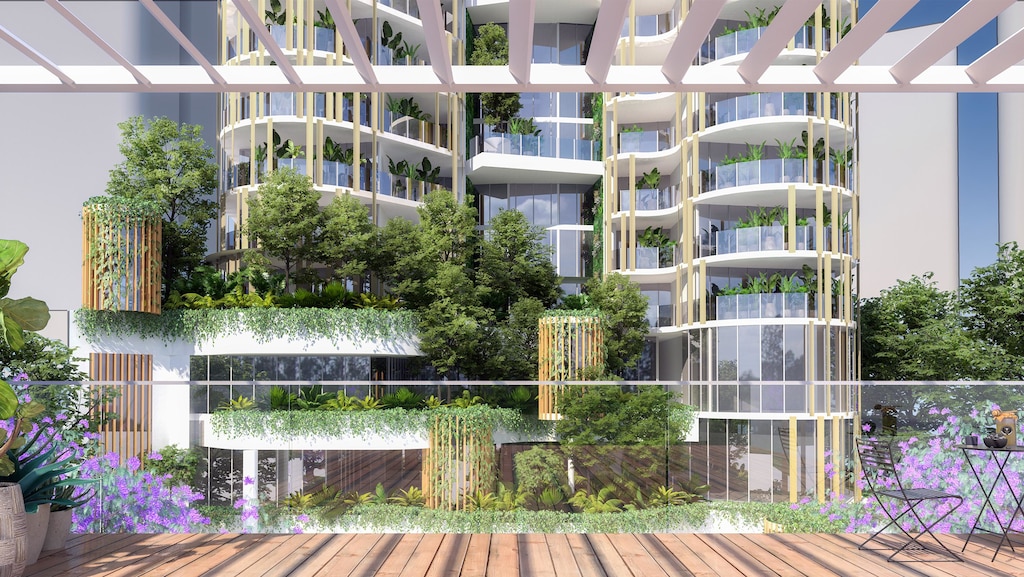 The skyline of Perth’s Applecross area will be transformed if plans for a 20-story “eco-friendly” development with vertical gardens gets approval.

It has submitted a development application to the City of Melville for the project, to be built on Forbes and Kishorn Roads close to Canning Bridge.

A recent application for a 16-story tower on Kintail Road in Applecross was knocked back by the Metro Central Joint Development Assessment Panel.

“It will create a vertical extension of the suburb’s tree-lined avenues, provide high-quality livable homes for residents, and has spaces for gardens and playgrounds,” he said.

Singapore-based WOHA has designed the towers as its first project in Western Australia.

The company is known as a leader in subtropical architecture and urbanism.

Its concept for the 2,023 square-meter Applecross site has focused on a “vertical suburban” feel by breaking up the building bulk, creating ventilation between towers and providing landscaping.

There will be 98 dwellings, 15 short-stay units, 563 square meters of space for retailers, dining and working, 164 car bays, a pool, bike racks, gardens and a deck on the top floor.

WOHA architects stated: "Traditionally, Perth has been quite averse to densification and high-rise living because people grow up in the beautiful, leafy suburbs of this city. Building on the principles outlined in our book Garden City Mega City, we are introducing our “vertical suburb” to Western Australia and are excited to announce our collaboration with @mjastudio on our first project in Perth, the hometown of WOHA co-founder Richard Hassell.
"The design of Forbes Residence does not make it an alien form that eats up the leafy, green suburbs. It keeps everything that is charming about Applecross - the Jacarandas dripping with purple flowers, the beautiful gardens, the backyards with hills hoists and children’s play areas, gazebos and barbecue pits – and adds the benefits of density to the street level, like the convenience of co-working spaces and good coffee right at your doorstep. The landscaping will include a community garden and heritage gardens, and to ensure that the vertical suburb fosters a community spirit, the apartments are clustered into little neighbourhoods to make this development a sociable place to live.

Zborowski said, pending approval, building could start at the end of 2020.