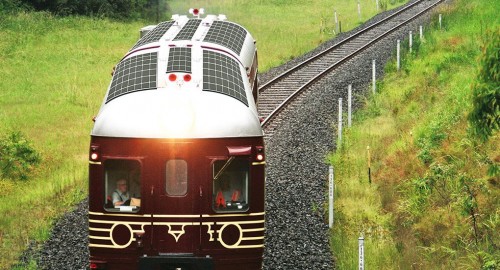 The world’s first 100% solar-powered train is now gliding down tracks in Byron Bay, Australia. The Byron Bay Railroad Company refurbished a three-kilometer, or almost two-mile, stretch of tracks and restored a heritage train, outfitting it with a 6.5 kilowatt (kW) solar array with flexible solar panels. A limited service launched over the weekend, with full service set to commence in January.

Byron Bay Railroad Company restored tracks and a bridge between the town of Byron Bay and the Elements of Byron Bay resort to provide affordable public transportation for locals and visitors. 100 seated passengers and other standing passengers can ride the solar train, and there’s room for luggage, bikes, and surfboards. The fare for a one-way trip is $3 for adults, $2 for ages six to 13, and free for children up to age five.

The flexible SunMan solar panels lining the carriage roofs produce energy that is stored a 77 kilowatt-hour (kWh) battery system, which can also charge up between trips via a 30 kW solar array at the main station. The battery bank has around the same capacity as a Tesla Model S, according to RenewEconomy, and can make 12 to 15 runs off one charge as it only takes the solar train around four kWh for each leg of the trip. A regenerative braking system “recovers around 25 percent of the spent energy each time the brakes are applied,” according to the Byron Bay Railroad Company website. The train’s lighting, traction power, control circuits, and air compressors are all battery-powered.

Byron Bay Railroad Company said they originally intended to offer a diesel train service before switching to solar, but the “accelerated development of technology in this area” made it technically feasible to create the solar train. One of two original diesel engines is still part of the train as a backup and for weight and balance. You can find out more about the train here.