Designs have been released for what is set to be Australia’s tallest building, pending approval by government bodies. The design is composed of two towers with twisting glass facades, and vertical and rooftop gardens.

Melbourne-based Cox Architecture (AAMI Park, Adelaide Oval) and Dutch firm UNStudio are responsible for the “Green Spine” design – the result of a sixth-month search by developers Beulah International, which paid $100 million for the Southbank site in 2017. The entire project is expected to cost more than $2 billion. 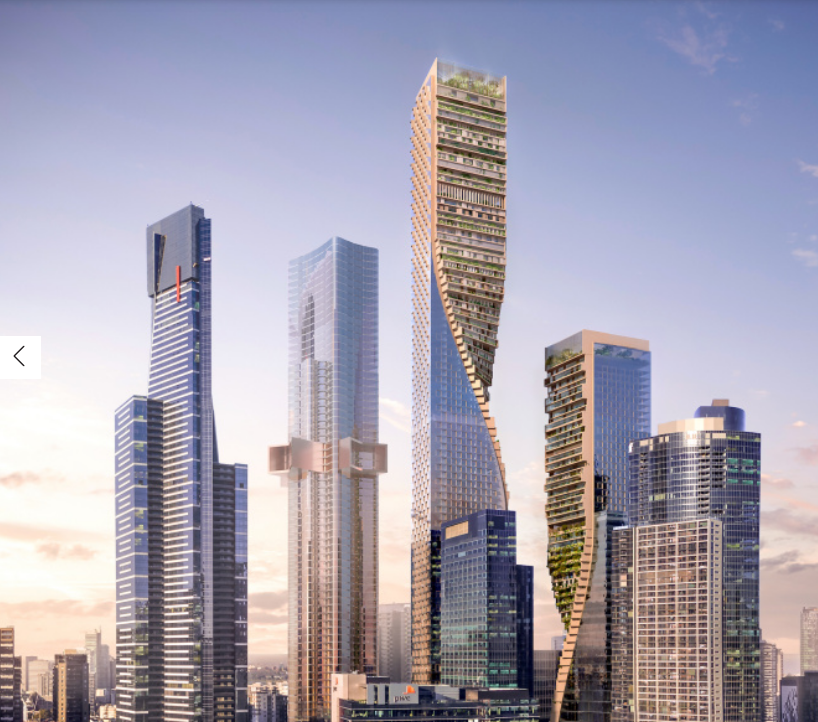 “The beauty of Melbourne as it’s known internationally is its gardens and landscape,” he says. “We want to be called ‘The Garden State’, and I think recent developments within the city of Melbourne have not necessarily embraced that.”

The smaller of the two towers is expected to reach a height of 252.2 metres and will include offices, a hotel, restaurants and bars. The taller tower, at 356.2 metres, will be home to the Future Botanic Garden – a publicly accessible rooftop space.

“The aim is for it to be a little microcosm of the Botanic Gardens,” says Rowe. “We’ve done work with some great international landscape architects to allow us to create a very unique, almost scientific space up there.”

Taller deciduous plants will be planted on upper levels to create shade from the hot summer sun and watered using recycled water from the building.

“We want it to be a living lung of the building in some way that can purify the air, improve shade and can have that freshness of landscape,” he says.

The gardens ascending up the spine will be accessible to workers of the building’s various commercial tenancies. Approximately every eight levels there’ll be a “neighbourhood green space” with more greenery and larger trees.

“This is about having neighbourhood green space,” says Rowe. “New York is very dense and it has beautiful pocket parks, so [the question was] how do we create a vertical village with pocket parks within the sky?”