DARWIN CASE STUDY ON DEALING WITH THE UHI EFFECTS OF CLIMATE CHANGE:

The concern in most Australian cities, and particularly in Darwin, should be with the public form of the city – with building frontage, with the streets, squares and parks, and with what is needed to make them safe, cool and enjoyable. Such street-form-based planning should replace “tidy town” zoning planning and code-based roads that ignore heat, landscape and the public. 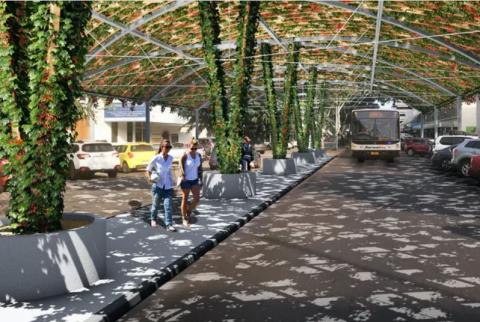 July 2018 in Darwin was 2℃ hotter than any previous July and the record heat has continued in recent months. Surveys show that people are leaving Darwin because of the heat.

What has gone wrong?

In the city centre, every second shop is closed and dark. Shops, offices and apartments have a 50% vacancy rate. There is no appreciation of the urban history of the decline: the growth of outer urban shopping malls, the closing of Woolworths in Knuckey Street in 2010; the changing in 2012 of the key Smith Street Mall – removing trees, installing canopies and dark pavement, and thus increasing temperatures.

The decline has not happened overnight but has been accelerated by the completion of a vast LNG project, by new shopping malls and chain stores, and by the impact of internet shopping. The Waterfront (mixed uses with a crocodile-safe “plage”) finished in 2013 is subsidised at a cost of millions every year. It is cut off from the city centre.

Traffic is reducing while more roads are being built. Darwin is over-roaded with roundabouts, pedestrian “seagull” median islands and refuges.

Over 35% of the city centre is unshaded blacktop bitumen, which lifts ambient and surface temperatures. There is only 14% green canopy compared to nearly 50% in tree-loving Singapore.

Every day the temperature rises above 30℃. The city centre can be up to 6℃ hotter. The bitumen surfaces reach temperatures of 66℃!

What can be done about this?

Professor Mat Santamouris of UNSW and the Northern Territory government has been studying heat in central Darwin for the past year using drones and 15 weather stations on light poles. Ambient heat, surface heat, humidity and wind have been mapped, eight heat islands (6℃ above ambient) and four heat sinks (cool areas below ambient) have been identified for the northerly (The Wet) and southerly (The Dry) weather regimes.

A predictive computer model has been built to evaluate proposed strategies to reduce heat impacts. Santamouris has recommended across the city centre: 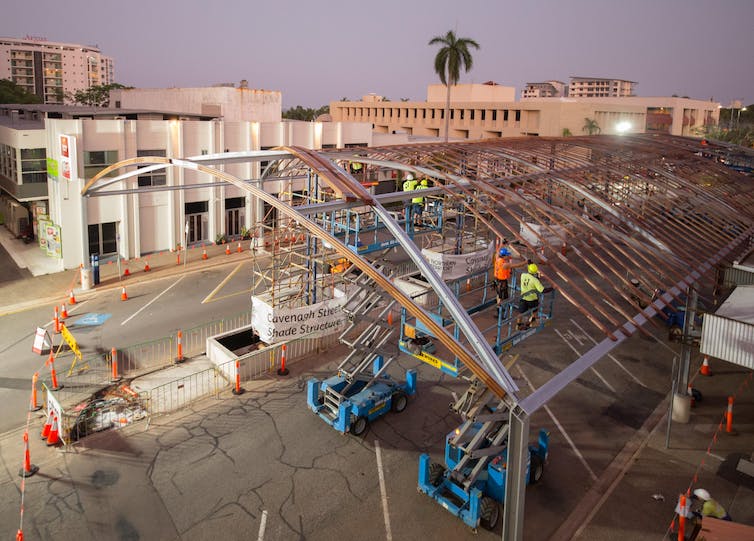 The government is using one block of Cavenagh Street as a heat mitigation trial. The 30m-wide street is the hottest street in the city centre. Due to lack of shading, surface temperatures in the afternoon exceed 60℃. The street also acts as a breezeway, “ducting” to the inner blocks hot, dry winds in the dry season and hot, humid winds in the wet season.

Black bitumen surface will be treated with more reflective cool pavement coatings and more trees will be planted. At the southern end a long cooling vine shade structure I have designed (with the structural engineer Max Irvine) is being constructed. Equivalent to 24 trees, it completely spans the roadway with a huge curved stringybark lattice prefabricated by the Gumatj in northeast Arnhem Land.

This large living shade structure has advantages over trees. It can be built in four months, does not interrupt underground services and resists cyclones. The vines will cover the roadway in 18 months. Trees take five years. 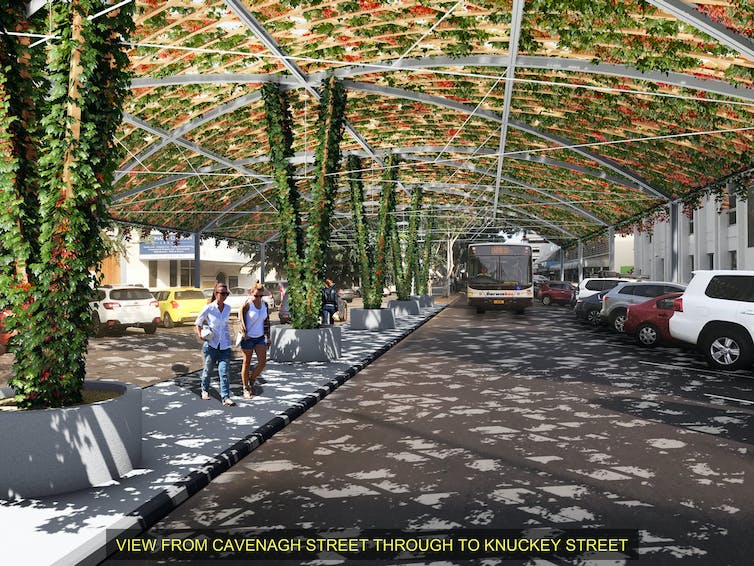 The vine shade structure will be equivalent to 24 trees but will shelter the street in months rather than taking years to grow. Author provided

But Cavenagh Street is only one of 30 blocks in Darwin. If the proposed mitigation strategies were fully implemented across the city centre, ambient temperature could be reduced by 2.7℃. This would not only make the city more comfortable for commerce but save lives and energy.

Principles for a cool Darwin

Like most cities, there is no overall urban management and coordination at the street level. Darwin’s centre is formed by the NT Planning Scheme. But within the scheme, public servants can play by their own rules: Planning, Transport, Roads, the Waterfront Authority, the City of Darwin (the council) and PowerWater. The result: Darwin streets are series of accidents.

Administrations need to be replaced in the city centre by a Cool Darwin Authority (small with highly qualified people, and with a Larrakia elder), to develop and implement, with genuine public dialogue and discourse (not so-called “consultation”), an urban design plan.

The first principle of this plan should be reducing the ambient temperature by 2.7℃. Heat stops walkability and wandering past shops.

This could be accompanied by a second principle – a “toolbox” for cool street design. This would including limiting bitumen area.

A “toolbox” for shop regeneration would be among other important principles. This would involve limits on chain stores, disincentives for landlord keeping shops empty, incentives for filling them (even with temporary uses) and support for historic businesses. Shop closure is contagious. Where shops are empty and streets deserted yoEmpty shops and deserted areas lead to graffiti, sleeping rough and dilapidation.

Streets are central to urban cooling. There is over 300,000m2 of black unshaded bitumen. Shading and street canopies (that do not trap heat) should be ubiquitous.

The urban order and scale from the 1869 Goyder Plan have been lost, as has the central square that would give an urban focus. Cities with closely spaced intersections seem to thrive more than cities with bigger grids. It seems the more corners the better; people bump into each other more often. There is “propinquity”.

Darwin has worked hard over many years closing its arcades and cross streets (Peel, McLachlan and Lindsay). The centre needs more effective interconnection: the high town (the mall/State Square) and low town (Waterfront) with a grand flight of stairs; the mall/State Square to Old Hospital Site/Myilly Point with a cooling lineal park, via a new (old) central square.

It all depends on how creative and open-minded to green infrastructure planning, the Darwin Government authorities can BE....???