A number of lampposts in Belgravia have recently been fitted with plant columns running up their length. It’s a trial to see if the green columns can help reduce pollution along the streets. 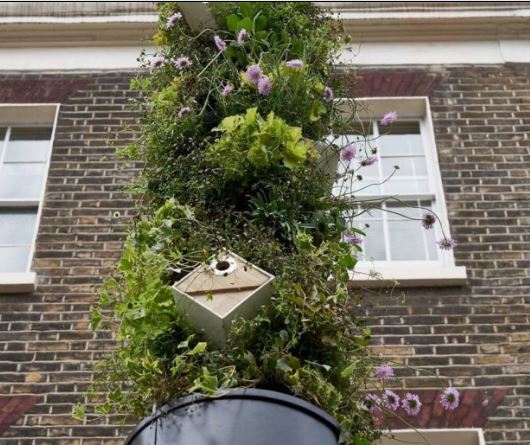 The Smart Pillar, which has been developed by Scotscape and Greenwich University, takes the concept of ‘vertical greening’, as seen on living walls, one step further.

In addition to direct environmental benefits, there is mounting evidence that incorporating and enhancing greening in the built environment can improve human well being as well.

The environmental impact of the lamp posts installed on Ebury street will be monitored by the University of Greenwich over a one year air quality assessment period, collaborating with Grosvenor’s participation in the London Air Quality Network, separately run by Kings College London.

The design includes a solar powered water pump and it recirculates the  water, reducing wastage. The plants running up the lamppost have been specially chosen for their ability to deal with pollution. There’s also options in the design for bird boxes, and commercially, for the bottom pot to be used for advertising.

The use of columnar living wall systems has been designed as an alternative to tree planting in congested city centres where utility pipes  beneath pavements often prevents tree planting.

With just under half a million lampposts in Central London, if the trial is a success, then there’s potential for a huge amount of greenery to be added to London’s streets.